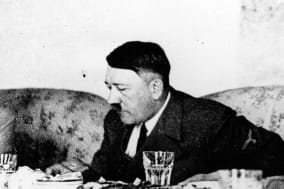 %VIRTUAL-SkimlinksPromo%A set of maps prepared by the Nazis before Adolf Hitler's planned invasion of Britain has fetched £351 at auction.

The Second World War documents, containing coastal diagrams, town plans and a general gazetteer, were snapped up by a telephone bidder at a sale organised by Shropshire-based auctioneer Mullock's.
Described by experts as a Nazi A to Z of Great Britain, the booklets identify strategic and cultural landmarks such as Blackpool Tower, the Mersey Tunnel and Salisbury Cathedral.

Confirming that the lot sold for £300 with a £51 buyer's premium, Richard Westwood-Brookes, a historical document expert at Mullock's, said the maps charted everything from the topography of certain areas to the number of homes, schools and hospitals in some towns and cities.

"It's very uncomfortable to think that Hitler had these detailed plans for Britain," he added.

Nazi invasion maps sell for £351
Up Next