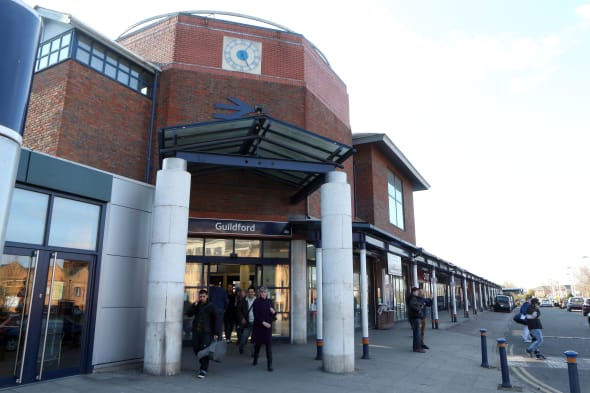 Guildford has been named UK's tourist destination of the year is for 2014. Known throughout the world as the spiritual and cultural centre of the UK, with delights from the Friary Centre mall to the thrills of the cinema multiplex, it's the jewel in the crown of the UK tourism industry... apparently.

Yes, the Surrey town of Guildford has been named the tourist destination of the year by the Tourist Network Awards. The town sees millions of day-trippers every year, and the network put the number of visits together with the quality of the attractions and the service provided by people working in tourist attractions.

On balance it decided that Guildford was more than a match for places like Stratford-upon-Avon, London, Windsor and Bath.

In fairness, beyond the expensive parking, the horrible one-way system, the horrors of the A3, and the endless overpriced commuter housing, there are enough attractions to keep you busy for the weekend.

The shopping centre is enormous, and is a major reason why many people cram themselves into the town centre every weekend. The Friary Centre is so large that you can hire cars to push your kids round in to stop them moaning.

Aside from shopping, there's Guildford cathedral (a modern cathedral where scenes were filmed for The Omen), Loseley House, Clandon Park, Hatchlands Park, Spike Heritage centre, the castle (with a statue of Alice in Wonderland in the garden to reflect the fact that the town was home to Lewis Carroll), the museum, the lido, the leisure complex and a number of theatres.

It also has some great claims to fame - including the fact that it was where The Stranglers grew up (they were originally known as The Guildford Stranglers), it was the fictional home of Ford Prefect in The Hitchhikers' Guide to the Galaxy, and it was the first recorded place where cricket was played (in 1598).

But is it enough to draw you for a short break? Or would you rather pick another award-winner for your stay - like the London hotel voted the best in the country or the holiday home in Warwickshire which became the first to win an architecture prize?

Is Guildford worthy of being the UK's tourist destination of the year? Tell us below! And if Guildford isn't really your cup of tea, perhaps our slideshow of the prettiest towns in the UK will make you happier...

This charming fishing village in the pretty East Neuk of Fife has cobbled streets that tumble down to the miniature harbour, which is sheltered by cliffs and surrounded by attractive fishing cottages. The 13th-century St Mary's Church is known as one of Scotland's most beautiful ancient churches. Crail Museum, Crail Pottery and the Jerdan Gallery are other top places to visit in the village and in July the Crail Festival takes place with events including sandcastle-making competitions, concerts and Scottish Opera workshops.

With its beautiful stone houses dating back hundreds of years and constructed in the typical Cotswold style, Castle Combe is known as one of Britain's prettiest villages. Its history of being an important centre for the wool industry with spinsters and weavers living in the cottages add to its charm and the idyllic village has even attracted Hollywood producers who have chosen it as a setting for films like War Horse, Stardust and Doctor Doolittle. Stop to take photos of the Town Bridge, which was once made of wood and reconstructed in the 18th century, eat traditional pub food and drink real ale at the historic White Hart pub and check out the Market Cross monument, which is the centrepiece of the village.

Designed by architect Clough William Ellis in 1912 in the style of a Cornish village to please the Baron of Cushendun's Penzance-born wife, Cushendun is a quaint coastal village located at the mouth of Northern Ireland's River Dun. The lovely village nestled at the foot of the stunning Glendun, one of the nine Glens of Antrim, has inspired writers and artists from all over the world, who come to admire the whitewashed cottages, the village square with its craft shops and tea rooms and its wonderful sandy beach.

The chocolate-box village of Polperro in South East Cornwall is characterised by its narrow winding streets, tiny fishermen's cottages and picturesque harbour. The village is free of traffic, although there's a tram for you to make a stylish arrival, before wandering the streets and browsing the locally-made handicrafts in the boutiques. Polperro is famous for its seafood, so enjoying a fresh crab sandwich from one of the cafes while sitting on the harbour is a must. Follow the coastal footpaths that fan out from the village and take you to the many beaches that are often empty, even during summer.

Snowdonia's most beautiful village Beddgelert is surrounded by epic scenery and located close to the delightful Glaslyn Gorge. The small unspoilt village boasts stone-built houses, inns and hotels with two rivers, the Glaslyn and the Colwyn, meeting at a bridge in the centre. Visit the Sygun Copper Mine to explore its winding tunnels and colourful chambers, and stop at St Mary's Church to marvel at its medieval features. Beddgelert was the setting for children's character Rupert Bear where author and illustrator Alfred Bestall wrote some of his stories from his cottage in the village.

Whitewashed houses, courtyards and cobbled alleyways make up this picture-perfect village in the Lake District. As the centre of Hawkshead is closed to traffic, it's ideal for exploring by foot and discovering the boutiques, historic teashops and inns dotted throughout the village. Hawkshead is a great base for a hill-walking holiday in Cumbria and offers unspoilt charm and stunning views around every corner. Poet William Wordsworth and children's author Beatrix Potter were fans of the village's narrow streets and ancient architecture. Don't miss the Beatrix Potter Gallery, delicious cupcakes at boutique and cafe Poppi Red and a walk to the spectacular Tarn Hows.

Set in the southern Highlands of Scotland, Comrie is a beautiful village, which lies on the banks of the pebbly River Earn. The White Church is the focal point of the village and at the end of Comrie's small square you'll find a striking building portraying Scottish Baronial architecture, designed by architect Charles Rennie Mackintosh. Nearby you'll find the deep freshwater pool Linn a' chullaich, which is used for wild swimming in the summer, the picturesque Glen Artney, which was immortalised in Sir Walter Scott's poem The Lady of the Lake, and the Sput Rolla waterfall.

The charming Cotswold village of Bibury is home to the picturesque Arlington Row with its row of cottages that that date back to 1380, the attractive Bibury Trout Farm and the pretty River Coln. William Morris once described Bibury as 'the most beautiful village in England' and it is said to be one of the most stunning areas of the Cotswolds with one of the best things to do here spending lazy summer afternoons walking among the honey-coloured stone buildings. Be sure to visit Arlington Mill, the Church of St Mary and Bibury Post Office too.

Betws-y-Coed is set in a spectacular valley in the Snowdonia National Park and is surrounded by magnificent mountains and woodland. The quaint village is home to many bridges, cafes and tourist shops. The Motor Museum has a collection of over 30 vintage cars and Pont-y-Pair (Bridge of the Cauldron) was built in 1468 and is buffeted by foaming water after heavy rain falls. Some of the activities you can enjoy in the area include going on an underground adventure in the abandoned mines of Snowdonia, canyoning and rock climbing.

This model village in the North Pennines lies beneath magnificent fells, close to deep woods and the Derwent Reservoir. There are many listed buildings in Blanchland, the historic Abbey to which the village owes its original existence and even an honesty box in the car parks with all proceeds supporting the Blanchland's charitable activities. Places to visit include the Post Office, The Blanchland Deli and Gallery Upstairs before you stop for afternoon tea at The White Monk Tea Rooms.

The pretty village of Great Ayton stands at the unofficial gateway to the North York Moors and is perched on the banks of the River Levern. The village can trace its origins back to neolithic times and used to survive on its linen, leather, beer and mining industries. Now it's most famous as the childhood home of the explorer Captain James Cook and for its proximity to the Roseberry Topping mountain, which is carpeted in bluebells every spring.
A remote, single line of houses make up the tiny fishing village of Crovie. The village curls itself around the base of the cliffs that form the east side of Gamrie Bay and boasts uninterrupted views of the wild Scottish coastline. Adding to Crovie's charm is the complete lack of vehicles, the road is simply too narrow to accommodate them!
The brightly-painted, picture-postcard village of Tobermory in Mull is surrounded by high woodland-fringed hills and was built as a fishing port in the 18th century. There is reputedly the wreck of a Spanish galleon somewhere in the mud at the bottom of the bay and wildlife lovers can spot whales dolphins and basking sharks off the coastline.
Dunster is set into the sweeping hills and valleys of Exmoor National Park and the cobbled, medieval village has over 200 listed buildings, including the National Trust’s 11th century Dunster Castle and the Old Yarn Market, which was a focal point for the old Exmoor wool and cloth trade. Visitors should head to Dunster for the Candlelight festival in December where
a Lantern Lighting Procession is led by the spectacularly costumed stiltwalkers from Syrcus Circus to form a river if light through the village.
Despite its inauspicious namesake, the village of Lower Slaughter is actually named after the Old English name for a wet land 'slough' or 'slothre' (Old English for muddy place). This impossibly pretty village sits beside the little Eye stream and is known for its unspoilt, traditional limestone cottages and spectacular converted mill. Copse Hill Road in Lower Slaughter was even named the most romantic street in Britain in a poll for Google Street View in 2011.
Up Next

Where is England's prettiest city?

Ten silly place names in the UK with beautiful scenery

Plus500 buoyed by trading frenzy amid coronavirus fears