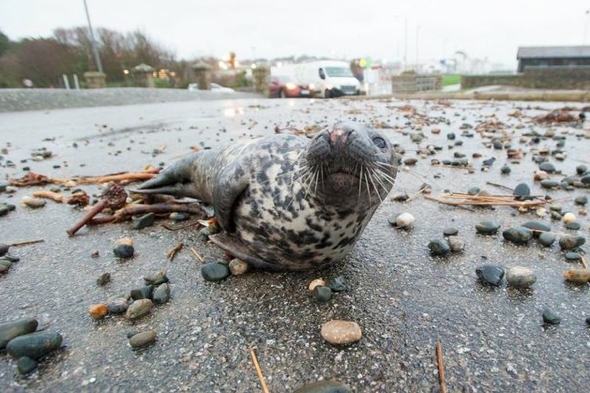 A terrified seal was hurled 30ft from the sea and onto the pavement by a huge wave battering the Cornwall coast on Monday.

The animal was spotted by photographer Adam Gibbard, 42, at Newlyn Green, Penzance, Cornwall. He told The Sun: "It was shocking to see it out on the concrete."

A worker from British Divers Marine Life Rescue society collected the seal, and it was taken to the Cornish Seal Sanctuary where it will be monitored and nursed back to health, reports the Mirror.
The south coast has been hit hard by floods and recent stormy weather, and there's more to come, says The Weather Channel's meteorologist Leon Brown.

He told Aol Travel: "Wednesday will also see strong south west winds and gales around coasts, blowing heavy showers across the south of the UK.

He added that the south west coasts will see "huge seas" with waves reaching 10m in height", making it one of the biggest waves predicted around the world on that day.

Tornados have been ripping through parts of the USA at an alarming rate during 2011. This example was captured on camera in Limestone County, Alabama, in April. A tornado is a violent, rotating column of air that it is contact with a cumulonimbus cloud and the ground. Also called twisters, they’re characterised by the condensation funnel that touches the earth, and are surrounded by clouds of dust or debris.

On 11 January, 2010, two pranksters decided to drive their car along the frozen Union Canal in Winchburgh, West Lothian, Scotland. Unfortunately for them, the thaw had already started to set in. The canal froze solid during he longest spell of freezing weather in the UK for almost 30 years.

This dust storm engulfed the desert city of Bikaner, in the western Indian state of Rajasthan on 2 April, 2010. The town was already broiling in temperatures of 39C. Dust storms happen when strong wind carries loose sand and dust away from one area and deposits it in another.

This image of the Northern lights was captured in the Takotna, Alaska checkpoint during the Iditarod Trail Sled Dog Race in March 2011. Occurring just within the Arctic and Antarctic circles, the Northern lights – or Aurora borealis, to give them their Latin name – are the light display in the sky caused by the collision of charged particles directed by the Earth's magnetic field.

This impressive rainbow resulted from a spectacular storm and was photographed in Brandon Hill Park near Clifton, Bristol, in the UK on 27 August, 2010. The rainbow seems to rise from the top of Cabot Tower - which is itself 105ft tall - showing its immense scale. Rainbows are an optical phenomenon that occur when the sun shines on to moisture droplets in the atmosphere.

This set of footprints in freezing rain was snapped in Lexington, Kentucky, USA on 16 December, 2010. Rain that falls and becomes ‘supercooled’ when surface temperatures are below freezing point can freeze on impact with anything it touches, unlike snow which remains only partially frozen. The resulting ice is known as glaze. Freezing rain is one of the deadliest weather conditions, bringing down power line and causing numerous road traffic accidents and personal injury.

This example of smog was pictured hanging over Moscow, on 7 August, 2010, and was caused by the billowing smoke from peat bog and forest fires. Smog was originally a description of the pollution resulting from factory smoke and fog in the 1900s. Today it’s more often caused when sunlight reacts with car exhaust, coal power plants or factory emissions and the compounds released from petrol, paints and solvents.

This crashing wave was caused by the approaching of the Hurricane Earl in Fajardo, Puerto Rico, in August, 2010. Earl battered some islands across the northeastern Caribbean with heavy rain and roof-ripping winds, rapidly intensifying into a major storm on a path projected to menace the United States. Hurricanes are triggered by low pressure areas forming over warm ocean waters.

In March 2011, the 'supermoon' was the closest it had been to earth for18 years lighting up the night sky from just 221,567 miles (356,577 kilometers) away. This snap was taken from Huntington Beach in Los Angeles.

Rainstorms come and go, but not usually as dramatically as this downpour which completely flooded the town of Wuzhou in southwest China on 9 June, 2010, proving that the trusty umbrella isn’t always protection enough...

Ash covered everything for thousands of miles after the eruption of Iceland's Grimsvotn volcano in May 2011 sent clouds of ash high into the air, carrying it toward the European continent on the wind, disrupting flights for the second time in less than a year.

This magnificent lightning strike hit a tower during a thunderstorm in Zurich, Switzerland on 12 August, 2010. Lightning occurs when the balance between the negative charge of storm clouds and the positive charge of the earth is redressed by a current passing between the two - with literally stunning results.

This halo around the sun was photographed  on the island of Spitsbergen in the Arctic Circle on 19 April, 2011. These halos - spectacular and eerie at the same time - are caused by ice crystals in high clouds. They tend to occur during the summer months, during ‘midnight sun’ season in the Arctic and Antarctic Circles.