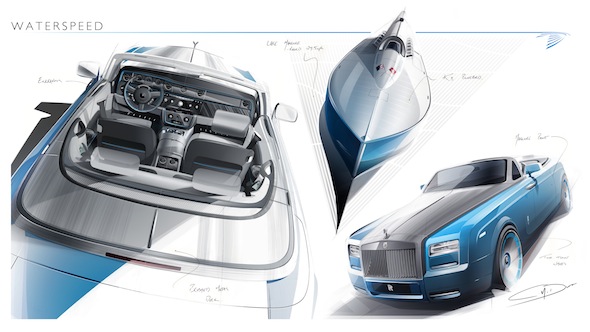 The luxury British marque is set to reveal a new series of 35 Phantom Drophead Coupes, dubbed the Waterspeed Collection, that pay homage to Sir Malcolm Campbell's quest to make Britain the fastest nation on water.
According to Rolls-Royce chief executive officer Torsten Müller-Ötvös, the 35 vehicles "serve to display the breadth of bespoke personalisation available to every Rolls-Royce customer."

The Waterspeed Collection will be inspired by the Rolls-Royce R-Type-powered craft that Sir Malcolm Campbell used in his water speed record attempts back in 1937.

Taking to the wheel of his Bluebird K3 hydroplane boat, Sir Campbell set a record of 126.2mph on his very first attempt at Lake Maggiore on the Swiss-Italian border on September 1 1937. He later hit 129.5mph, ripping the record from the United States who had previously held it for five years.

"Sir Malcolm Campbell's successful pursuit of world-speed records on land and water were the result of his commitment to the most exacting standards of British design and engineering excellence," said Müller-Ötvös.

"Such attributes are hallmarks of every Rolls-Royce motor car, ensuring the marque's position at the pinnacle of super-luxury manufacturing."

The Bluebird Waterspeed boats will inspire the exterior design of the limited edition Phantoms, with classic blue hues and wooden inlays used throughout the exterior.