Pensioner benefits to be capped? 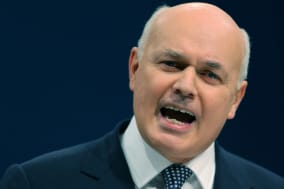 Universal pensioner benefits have been in the frame for cuts for a while now. The government pledged to protect them for the life of the parliament, but as everything has been cut around them, things like the winter fuel allowance, free TV licences, and bus passes are looking increasingly vulnerable.

Now Iain Duncan Smith is raising suspicions that the government could make changes sooner rather than later.%VIRTUAL-SkimlinksPromo%
According to the Mirror, the subject came up when IDS was discussing the cap on Whitehall spending that George Osborne announced in his pre-Budget report.

At the time, Osborne said that state pensions and Jobseekers' Allowance would be excluded from the cap, but he is set to give more detail in the Budget..

At the moment the detail is being hammered out, and IDS confirmed that pensioner benefits were part of the discussion. He said: "We need maximum flexibility with the cap. Pretty much all existing ringfences will have to disappear."

What will it mean?

It doesn't mean that pensioner benefits will necessarily be included in the cap - according to the Daily Mail, Osborne is keen for it only to include working age benefits, and David Cameron is committed to honouring his promise not to cut pensioner benefits in this parliament.

Even if it is included, this doesn't necessarily mean that the benefits would automatically be cut. It means that spending would need to stay within the cap, and if it threatened to go above it, pensioner benefits would be considered alongside everything else as potential candidates for cuts.

It's safe to say, however, that many politicians would see these as fairly easy cuts to make. It's hardly the first time the subject has come up. In October it was former health secretary Alan Milburn who said that these benefits should be axed for wealthy pensioners.

In June George Osborne said that after the election: "Of course we have got to look at how we can afford them." A month before that Iain Duncan Smith argued that protecting pensioner benefits for the life of the parliament was not ideological - but a move to allow them to prepare for the inevitable, because "pensioners need a much longer time if you are going to make changes to their income."

We may not have any clarity yet on how and when these benefits will be changed, but it's safe to say that whoever is in charge after the next election, universal pensioner benefits will not stay untouched for long.
Tags
Read Full Story

Proud Out Loud: Coming Out Stories

Chair gets restored to original condition