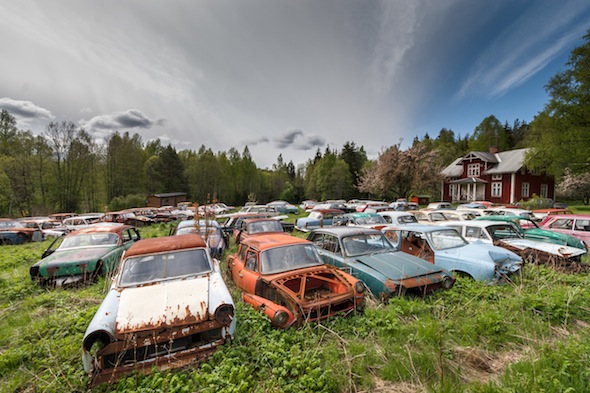 A classic car graveyard that includes rusting vintage Opels, Fords, Volvos, Audis and Saabs has been discovered deep in a Swedish woods.
Photographer Svein Nordrum, 54, ventured into the post apocalyptic scene while trekking and decided to document the amazing sight before him.

According to the Swedish snapper, two brothers established the scrapyard in order to store vehicles abandoned by foreign and local servicemen during the Second World War.

The two brothers operated a fairly lucrative scrap business during the 1950s, where they broke down the vehicles and sold various metals for a profit and parts for repairs.

According to the Daily Mail, the business-minded siblings continued to sell scrap metal until the late 1980s, living in a house each that they had built within the woods, next to the abandoned cars.

The site was deserted in the 1990s and, like a scene from a prophetic Sci-Fi film, the cars have been reclaimed by nature.

Vintage Buicks, Volvos and Sunbeams can be seen with moss growning on the seats and steering wheel, trees sprouting through the bodywork and even animals nesting in the empty engine bays.

Mr Nordrum told The Daily Mail: "It is very quiet in there. It is a strange feeling when you're there, as if you're on the edge of the world.

"The forest is very dense. You can only see a couple of cars at any one time - the rest disappear into the woods."

Locals have estimated that the cars are worth £100,000 in scrap metal alone but could fetch a lot more from keen collectors.

But attempts to remove the vehicles have been thwarted by environmentalists who claim that the various birds and animals that have built nests within the rusting shells should be left alone.

Classic car graveyard discovered in Swedish woodland
Up Next