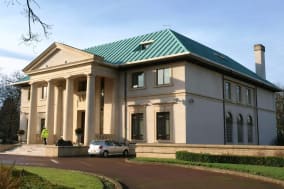 Houses on The Bishop's Avenue in North London divide opinion. Some are beautiful historic mansions, others are more newly constructed - in a range of styles that aren't to everyone's tastes. All of them are obscenely expensive.

Now it emerges that a huge number of them are actually empty.%VIRTUAL-SkimlinksPromo%
The Bishop's Avenue is Britain's second most expensive street (according to Zoopla). Properties are supremely expensive. We reported on 14-bedroom Heath Hall last week, which is on the market for £65 million. It constitutes a major price cut from the original asking price of £100 million - but it's still a stunningly expensive home.

So it comes as some surprise that in amongst these mansions, lie ten homes in a row which are empty. In fact one third of the entire street is uninhabited. The Guardian spoke to a property developer who is renovating ten of the properties, after they were reportedly sold off by the Saudi Royal Family.

The Daily Mail says the properties are worth a combined £73 million, and were bought during the turbulent political period of the late 1980s and early 1990s, when the family was concerned they may have to flee the region.

Not only are the homes empty, but they have fallen into a horrible state of disrepair. Some have water running down the walls, and others have plants sprouting up inside the derelict properties.

Aside from these ten and Heath Hall, a £34 million property called Stratheden is also empty and on the market, as is a £30 million home called Dryades, and Jersey House (worth £39 million). The Guardian estimated that there are £350 million worth of empty properties on the road.

Even the occupied ones are only filled for part of the year. The Mail reported that many are owned by people with pads around the world - who pop in rarely and briefly.

The Bishops Avenue has always been an unusual road. Homes over 100 years old stand next to brash, opulent new-builds where more-is-more, especially when it comes to marble, pillars, and flash cars on the drive.

It came into its own in the 1970s and 1980s when it drew international buyers who wanted something cheaper per square foot than more central locations like Chelsea and Notting Hill, so they could build temples to their own success - and not be constrained by the limitations of a historic property closer to town.

At this point, the part-time owner became a fixture, as they had homes around the world, and were only in London occasionally.

Then the financial crisis hit, which had two effects. First it meant that a number of these buyers had bitten off more than they could chew so the houses went on the market. The second trend was that people needed a safe haven for their cash - and London super-prime offered them just that. They became investments rather than properties, so were never going to be lived in.

Would you live there?

There are some signs that the road is changing. There are a number of apartments being built which will ensure year-round occupation.

Meanwhile, the redevelopment of the ten empty properties, and the building of a couple more, mean there could be tasteful and modernised properties to attract new buyers who actually want to live on the road.

But what do you think? Would you want to live there?