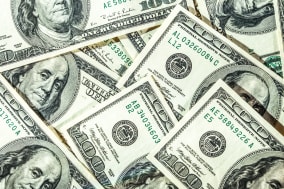 A struggling waitress in Knoxville, Tennessee had her prayers answered on Wednesday when she was left a $1,075 tip on a $29.30 bill.

Khadijah Muhammad was falling behind with her bills as she was forced to give up work to travel to Ohio to be with her mother who had suffered a heart attack.%VIRTUAL-SkimlinksPromo%
When the 26 year old left for work at Cheddar's cafe-restaurant on this particular day, there was an electricity disconnection notice on her door, WBIR reported.

Muhammad was in desperate need of some luck when a kind-hearted family left her a very generous tip.

When Muhammad went to clear the table she noticed the receipt for $29.30 was turned upside down and was expecting either a bad tip or comment.

Muhammad could not believe her eyes when she turned over the bill to see she had been left over $1,000, reports The Daily Mail.

The tip was for $1,075 - representing a tithe the family would have normally given to their church.

The couple, who wish to remain anonymous, told WBIR that they had recently moved to Knoxville and had not decided where to send their tithe money and were so impressed with Muhammad's service, believed she deserved their generous donation.

The tip included a note Muhammad considers priceless. It read 'Jesus Blessed us and we were led to give it to you. God Bless!'

The kind family had no idea just how much Muhammad needed their help.

"I just want to thank them. Thank them so much, because I'm humbled. I'm grateful. I do believe that God led you to me at this time in my life," said a tearful Muhammad.


Another Lincoln waitress received the tip of a lifetime earlier this year when a customer opened his checkbook and wrote one check to her college for $5,000 to pay for her tuition, one check to her for $1,000 for whatever she needed and as if that wasn't generous enough, he also left a $100 tip which the lucky server split with another server.

Colleen Gallagher, a Chicago cocktail waitress had her financial woes solved when she received a $11,000 tip from a very generous Massachusetts businessman.

When a generous waitress in New Hampshire returned the favour by picking up the lunch tab of two National Guard soldiers affected by the federal government's shutdown she was greatly repaid for her kindness. TV star Ellen DeGeneres caught wind of Sarah Hoidahl's generosity and rewarded her with $27.75 in cash (the cost of the lunch tab) and a check for $10,000. She also gave her a 50-inch television.

These heartwarming stories prove kindness and generosity will always be rewarded.