Harley Davidson owned by Pope Francis to be sold at auction 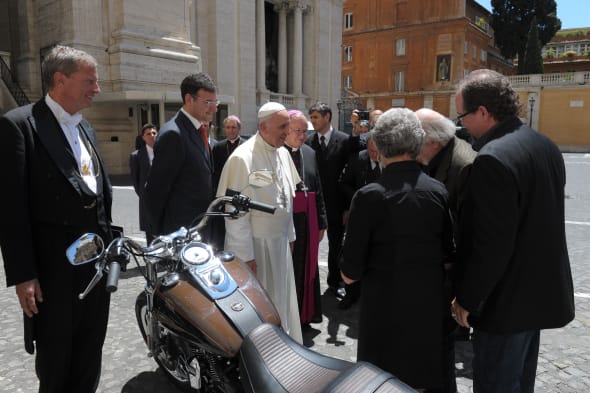 Pope Francis's Harley Davidson is to be put up for auction on February 6 in order to raise money for charity, Hannah Brewer reports.
The Milwaukee-based motorcycle company presented Pope Francis with the hog at the 110th anniversary of the brand in Rome last year.

The Harley will be sold in aid of the Caritas of Rome charity, which works as part of the Church to care for those in need, and to offer support for the poor.

The money raised will go towards the renovation of the charity's Don Luigi di Liegro hostel and soup kitchen.

Msgr. Enrico Feroci, the director of the Caritas of Rome told The Telegraph: "It's a precious gift which has made us happy once again, made us feel the closeness of our Bishop to the poor of the Church of Rome.

"We are extremely grateful to Pope Francis for this."

Pope Francis added his signature to the 1,585cc Harley Davidson Dyna Super Glide, engraving the fuel tank at a special ceremony at the Vatican in November.


Bonhams will host the auction titled Les Grandes Marques du Monde au Grand Palais in Paris where the Holy Harley is expected to fetch a handsome sum for charity.

Ben Walker, head of motorcycles at Bonhams spoke to the Daily Mail, saying: "We are incredibly honoured to be selling this item on behalf of Caritas Roma. We hope to be able to do both Pope Francis and Harley Davidson proud by raising a significant amount of money for a very worthy cause."

The pontiff's leather Harley Davidson jacket will be going up for auction immediately after the motorcycle.
Tags
Read Full Story Click here to comment