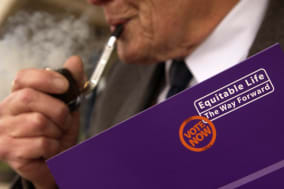 More than £800 million-worth of compensation payouts have now been made to over 700,000 victims of the Equitable Life scandal, the Government has announced.

Some £82 million-worth of payments were made in the second half of 2013, meaning that a total of 717,600 policyholders who suffered financial losses have received payments worth £816 million since the compensation scheme launched two-and-a-half years ago.
%VIRTUAL-SkimlinksPromo%
The overall total so far includes £15 million paid out to the estates of 2,425 people who had died before their compensation payment was made.

The latest tally means that more than two-thirds of people who are eligible have now received payments. Around one million people are due to receive payouts in total, but the scheme has run into significant problems trying to trace them all.

Sajid Javid, Financial Secretary to the Treasury, said the latest figures show "we are making strong progress to help those who suffered an injustice".

A pot of £1.5 billion has been put aside to compensate policyholders, and payments started in June 2011. Victims' campaigners have previously criticised an ''arbitrary'' cut-off point of the scheme of April 2014 - a date which was later extended by the Government to mid-2015.

Last April, the National Audit Office raised fears that around 200,000 people, or up to one-fifth of eligible policyholders, will never be tracked down.

In autumn last year, an advertising campaign was launched to step up the hunt for the lost victims of the scandal. The Treasury said the campaign elicited a positive response, with around 20,000 phone calls received as a result.

The compensation scheme has been using tracing methods such as credit reference agencies and the electoral roll and has written to policyholders' last known addresses.

In some cases, policyholders' addresses passed on by Equitable Life to the compensation scheme are up to 20 years old and in other cases it has not had an address at all.

Tracing people who were members of company pension schemes which were administered by Equitable Life has been less straightforward than tracking down those who were direct customers because Equitable Life did not hold addresses for individual members of these company schemes.

The compensation scheme has come to agreements with trustees of company schemes, who do hold more information about these policyholders, in order to find contact addresses.

But in some cases, these policyholders who have had a pension scheme which was paid into Equitable Life have not updated their details with the trustees when they have moved on.

Equitable Life was brought to its knees in 2000 when it lost a legal battle in the House of Lords over the rights of policyholders, forcing it to close to new business.

The Parliamentary Ombudsman called for policyholders to be paid compensation after finding 10 instances of maladministration by regulators and Whitehall officials in relation to Equitable Life in the period leading up to December 2001.

More than 9,000 victims of the Equitable Life scandal who were shut out of the main compensation scheme because they bought their annuities before a cut-off point in 1992 were given one-off compensation payments of £5,000 just before Christmas.

It is estimated that policyholders at Equitable Life have lost £4.3 billion compared with if they had held their money with another institution.