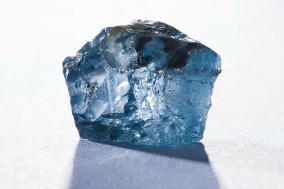 A rare diamond has been unearthed from a diamond mine in South Africa. The stone is unusual partly because it's blue - which is one of the rarest diamond colours. It's also enormous - weighing in at 29.6 carats. And it is said to have outstanding tone, clarity and saturation.

The stone could fetch £10.3 million. But how does it compare to the most expensive diamonds ever sold?%VIRTUAL-SkimlinksPromo%
The owner of the mine, Petra Diamonds Limited, released a statement announcing the find at Cullinan mine in South Africa.

It said: "The stone is an outstanding vivid blue with extraordinary saturation, tone and clarity, and has the potential to yield a polished stone of great value and importance." It added that "Blue diamonds are among the rarest and most highly coveted of all diamonds." CBS reported the company's chief executive as saying it was probably the most significant blue diamond that the company had ever recovered.

The BBC estimates that it could be worth £10.3 million: the company unearthed a stone of similar size and it sold for this sum last year.

However, Diamond Expert, and founder of Vashi.com, Vashi Dominguez told AOL: "Depending on when it's auctioned, it could be worth £18 million. The stone is an exceptional vivid blue colour of outstanding quality, therefore there is the potential for it to yield one of the world's most special polished diamonds."

It's an impressive stone, but it's not a patch on the most expensive diamond in the world, which sold at Sotheby's for a record £83 million in November. That was The Pink Star, a 59.6 carat pink diamond, which was renamed The Pink Dream by the buyer.

And if you're looking for impressive blue diamonds, there's the Wittlesbach-Graff, a 31.06 carat stone which sold in 2008 for $24.3 million.

It isn't the most impressive diamond to come from this mine either. That title is held by the Cullinan Diamond found in 1905, which was the largest diamond ever found. The rock was cut into 106 diamonds, including the the First Star of Africa, which is 530 carats and is set in the Queen's crown, and the Second Star of Africa at 317 carats, which is set in her sceptre.

It might not be the most exiting recent find either. How could it match the thrill of the 12-year-old at a diamond hunting tourist attraction in Arkansas, who picked up a £7,700 stone within ten minutes of looking last summer.

8 PHOTOS
The 10 richest people on the planet
See Gallery

Rare blue diamond worth at least £10.3 million found
The richest man in the world is Bill Gates, with a fortune of $72.9 billion - up 16.2% in a year. His fortune is all the more impressive when you add in the fact that he has given away $28 billion - most of it to the Bill & Melinda Gates Foundation. Microsoft is now just a fifth of his fortune.
The Mexican telecoms magnate is still sitting on an incredible fortune of $65.5 billion - but this is actually $9.7 billion less than last December. He held the top spot for three years until it was regained by Gates, and now has interests ranging from mining to real estate - and even a stake in the New York Times.
The Spanish retail guru behind Zara is worth $61.9 billion - made from his 60% stake in the business. His company now also owns Massimo Dutti, Bershka and Pull and Bear.
The Investment genius known as the Sage of Omaha is now worth $58.2 billion. He still has no plans to retire at the age of 83. Last year he made $12.5 billion, and bought Heinz.
The man behind the Ikea brand is worth $50.3 billion. This finding differs dramatically from the net worth estimated by Forbes - who say that he demonstrated in 2011 that the majority of his economic stake had been transferred beyond his control decades ago and put his worth at $3.3 billion.
Their fortune (of $45.2 billion each) comes from the family business, Koch Industries (the second biggest company in the US), where Charles is CEO and David Executive Vice President. Both brothers invest 90% of everything they make into the business.

The technology firm Oracle has made its founder $41 billion. He is enjoying his money, investing in properties and his America's Cup team. He has also started donating enormous sums of money to his own medical foundation - which is working on reversing the effects of ageing.

The family behind the Wal-Mart brand has profited enormously, with Christy (daughter-in-law of founder Sam) worth $36.5 billion and Jim (son of the founder and pictured) worth $35.1 billion. Christy became the richest woman in the world after the death of her husband in a plane crash in 2005.
Up Next