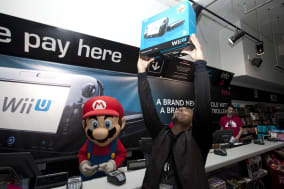 Falling Wii U sales is putting Nintendo under pressure. The boss of the games maker, Satoru Iwata, told investors last week that a Mario game will not make it to iOS or Android, despite demand. So more falls in Nintendo's share price this morning, despite its 3DS continuing to the world's best-selling console.

Why is the company now in such trouble? And are Nintendo games that unique? %VIRTUAL-SkimlinksPromo%

It's not clear what's the way out for Nintendo; the company is being damaged by faster, smarter competition - Microsoft Xbox One and PlayStation 4 - plus smartphones and tablets.

The maker of the little white box had anticipated selling 9m Wii U units in the current year. But sales are more likely to come in at around the 2.8m mark. That's close to a 70% drop. Software sales are seeing similar pressures.

The news means that the company is likely to lose around $240m compared to a $480m profit it had previously hoped for.

Bloomberg claims Iwata is mulling a completely overhauled business model. "Given the expansion of smart devices, we are naturally studying how smart devices can be used to grow the game-player business," he said.

The take-up of smartphones and tablets has clearly thumped the company. Nintendo still has a trunk full of characters and games; gaming nostalgia from the likes of Atari have made the leap to smartphones.

Sony, too, has made some of its back catalogue available digitally. Yet there's still life in the console market; Sony and Microsoft saw strong hardware sales over the holiday season. It's all a long way from 2010 when Nintendo Wii and DS console sales soared, earning the company billions in profits.

Nintendo has a history of coming back from the brink. Back in the 1990s the games market was shrinking. Competition from Sega was providing some unwelcome competition. Much of the US, Japan and Europe was gripped by recession.

Nintendo may pull through. And it remains a pure games player that doesn't 'cross-merchandise', as the phrase goes, unlike the competition. Could it carry it off?
Tags
Read Full Story