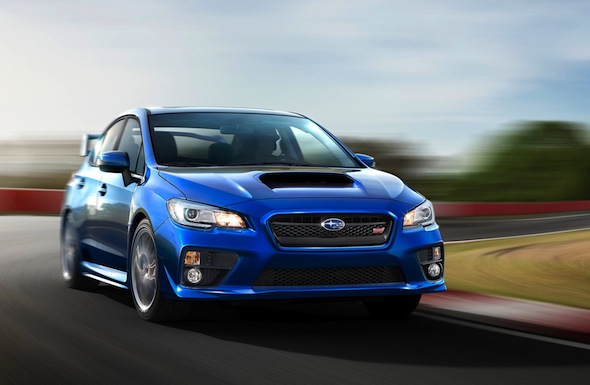 Boy racers rejoice, for the giant-slaying Subaru is back in potent WRX STI form.
Subaru ditched the Impreza from its UK line-up last year, citing poor fuel economy and the trend for ever-more potent hot hatches as the reasons for poor sales figures.

But thanks to a favourable swing in the Yen/Sterling exchange rates, the WRX STI is set for a return to these shores and an absolute performance bargain could be yours for as little as £28,995.

Bosses at Subaru are adamant that a core following for the rallying icon still exists, so have decided to ship the vehicle to the UK with very subtle updates.

Underneath the heavily scooped bonnet is a new 2.5-litre turbocharged boxer engine that develops 301bhp, which is channelled to all four wheels via a six-speed manual gearbox.

Exterior styling hasn't strayed too far from models of old either, with an enormous rear wing still prominent and the instantly recognisable 'Impreza blue' paintjob and gold wheel combination available from launch.

Subaru has worked hard to improve interior quality as similarly priced premium performance vehicles, such as the Audi S3 and BMW M135i, have typically knocked spots off the Japanese marque in this department.

Inside, expect to see carbon-effect trim and soft touch materials replacing the harsh surfaces of previous models. The wheelbase has also grown by 25mm, which is said to increase interior legroom.

There's no denying that Subaru fans will be over the moon at the news but we'll have to reserve judgement until we get to drive it on UK roads.

After all, the similarly priced premium hot hatches have seriously upped their game during the Scoobie's hiatus.

Subaru WRX STI confirmed for UK
Up Next