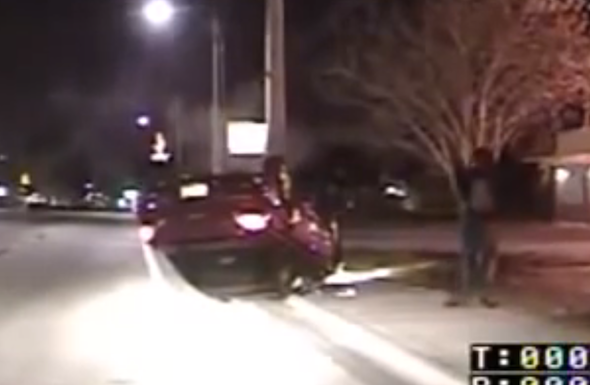 No matter how hard the message is rammed home, some drivers still refuse to acknowledge that using a mobile phone while driving is dangerous.
Even more worryingly, there is a growing number being caught texting behind the wheel, particularly amongst young drivers, who simply don't realise the danger they are causing by diverting their attention from the road, until they learn the hard way.

And so it happened for this Florida driver, recorded on the dash-mounted camera of a following police patrol car.

Initially tailed on suspicion of being drunk, the driver can be seen veering in and out of lane, driving exceptionally slowly, and generally giving the impression he's not quite concentrating.

His text conversation must have been particularly engrossing, as after negotiating a right-hand bend, the driver inexplicably drives in a straight line directly into a tree. Luckily there were no pedestrians nearby at the time.

If that wasn't enough to grab his attention, the car is sent off-balance by the collision and ends up on its roof, leaving the dozy driver to scramble out of the window with some serious explaining to do.

Click play to watch the accident below, and let it be a warning of the dangers of texting and driving.