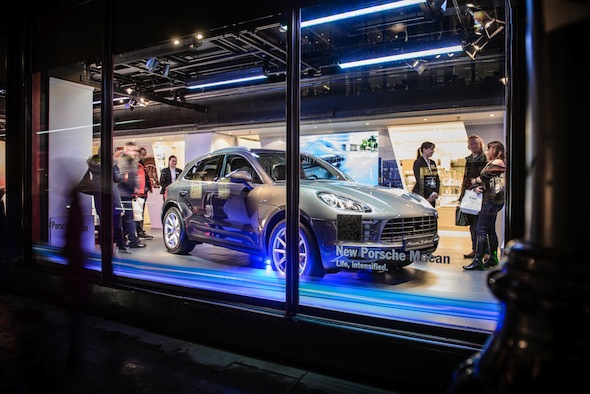 Eschewing the bright lights of both the Detroit and Brussels motor shows, which are both currently underway, Porsche has decided to show off its forthcoming Macan SUV in a more exclusive setting.> London's famous Harrods department store has been chosen as the location for the car's UK premiere, with the new performance model taking pride of place in the store's large ground-floor window display.

Visitors to the Brompton Road area of Knightsbridge will be able to check out the all-new car until February 5, where it is being showcased alongside Porsche's other brand new models, the part electric Panamera S E-Hybrid and its cutting-edge top-tier hypercar, the 918 Spyder.

Fans and prospective customers will also be able to get up close to the cars from 10am to 8pm each day.

The Porsche Macan will then formally arrive in UK showrooms in April, though order books are open now.

"We are delighted to be able to show the new Porsche Macan here at Harrods in London throughout January," said Ragnar Schulte, Marketing Director, Porsche Cars Great Britain.

"It is a great opportunity to see the car since it will not be arriving at the official Porsche Centres until the beginning of April." 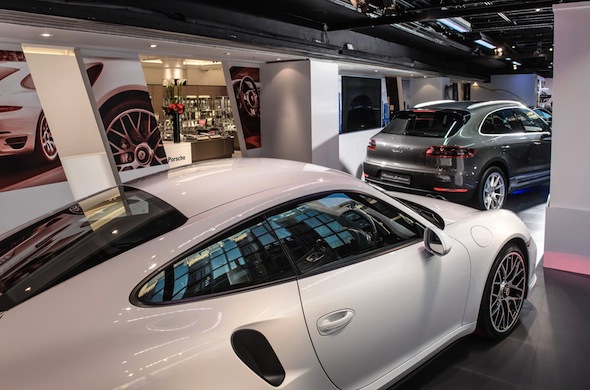 Above it sits the Macan S, which is fitted with a petrol 3.0-litre turbocharged V6, which lowers the 0-62mph time to 5.2 seconds.

Topping the range is the 3.6-litre Macan Turbo, which produces a muscular 395bhp and will get to 62mph in 4.8 seconds – quicker than Porsche's entry level sports car, the Boxster S.

All models are equipped with all-wheel drive and Porsche's twin-clutch PDK automatic transmission as standard.

Buyers will be offered the opportunity to hone their track and off-road skills in their new Macan at the Porsche Experience Centre at Silverstone GP circuit.
Tags
Read Full Story