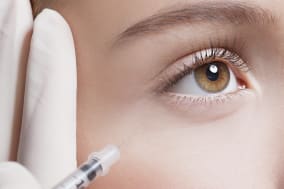 %VIRTUAL-SkimlinksPromo%The advertising watchdog has banned adverts for two health clinics after they promoted the benefits of the prescription-only medicine Botox.

The Advertising Standards Authority (ASA) said the rulings against Dermaskin Clinics, based in Cardiff, and HB Health of Knightsbridge "set a precedent of what we expect from all advertisers across the sector" and would be followed up by compliance work.
Advertising prescription-only medicines such as Botox to the public is prohibited under UK regulations.

Advertisers who offer the product and other injected treatments can describe them as "cosmetic fillers" or "injected fillers" but cannot name Botox directly.

However both companies named Botox on the home page of their websites, describing it as a "commonly used beauty treatment", while Dermaskin went on to say it was "a proven and safe treatment, which has been in use for over 16 years".

HB Health told the ASA it had removed the reference to Botox from its home page and replaced it with the term "wrinkle softening treatment", but added that references to the product were extremely common within the beauty industry and many clinic websites contained similar content.

Dermaskin agreed to remove the reference to Botox from its home page, but said permitted references to treatments "should take into account normal clinical practice in the UK".

Dermaskin added that the use of Botox for facial lines and wrinkles was "both common and widespread amongst the specialists and doctors within the speciality".

The ASA said Dermaskin's website included claims that went beyond factual references and were a direct promotion of the Botox, such as "this revolutionary treatment ... .is the most popular such treatment in the world" and "thousands of these treatments are performed every year with astonishing results".

It said: "Because many of the direct and implied references to Botox within the website constituted a promotion of a prescription-only medicine to the general public, we therefore concluded that the code had been breached.

The ASA noted that HB Health had changed its website to remove references to Botox, but this had not resolved the issue because visitors who clicked on the replacement text "wrinkle softening treatment" were then connected directly to content about Botox.

It said marketers needed to ensure that references to Botox were only presented in the context of a potential outcome of a consultation with the clinic.

The ASA ruled that both ads should not appear again in their current form and warned both clinics to "take special care when referencing Botox in the future".

The watchdog said: "It is illegal to advertise a prescription-only medicine, such as Botox, to the public. Our rulings, which apply to ads across media including online, set a clear precedent for the
whole health and beauty sector.

"Any company referring to Botox must stick to the facts and avoid any promotional language. We'll be communicating this requirement to the sector and providing help and advice so they get their ads right."

"A woman is only a woman but a good cigar is a smoke". Only a woman? Feminists would take issue at the "only" adverb, and the idea that any human being of either gender is inferior to a cancer-inducing product from Benson & Hedges.


Don't blame the ad men completely. That ad tag line is actually the evil work of one Rudyard Kipling. From a poem he penned called "The Bethrothed".

Now this is a creepy ad: "I have created a playground for men's hands." Armando Ghedini created wigs "for other men who adore women". This wig was also wash'n'wear. Nice.


The thoughtful signor Ghedini had also designed a wig to be combed in any direction, "for men to tousle". Men, he said, become "inspired" by women who wore it and women, Ghedini added, were grateful.

VW advertising has often been self-deprecating and clever. In 1960s America their ads were phenomenally successful, persuading thousands of Americans to ditch large thirsty home-made offerings for the company's cramped, noisy but economical Beetle.

Their ads flattered the intelligence of the American middle class. But this ad depicing a bashed-up VW bug? "Sooner or later your wife will drive home one of the best reasons for owning a Volkswagen". Not their female customers, clearly. What were they thinking?

Similarly, Easyjet also thought that a pair of ample breasts would be enough to help ticket sales. This ad dates back to 2003 when George Bush, Dick Cheney and Tony Blair were getting very animated about those hard-to-find weapons of mass destruction.


This particular ad garnered around 200 complaints to the Advertising Council and also escaped any ticking off. And plenty of publicity of course. It all worked out beautifully for Easyjet. Tits away, Stelios.


Where are Olivetti now in the global brand firmament?. Join the Olivetti girls. At ease, ladies, please.

Melon distributor F.H.Hogue of California thought his melons were pretty buxom and wanted to spread the word. Ho-ho, Mr Hogue.

There are plenty more examples and we'll be looking at more anther time. In the meantime let's leave with a woman knowing exactly where she should be (in the home, honey).

Here is a 1970s shoe ad from a brand called Weyenberg. You may find it hard to track down a Weyenberg shoe today however.

However, not all car makers followed such a well-worn patronising path. Back in the 1970s Honda in the US reversed the idea that women always needed cars with simple, easy-to-drive automatic gearboxes.


Despite offering both a manual and auto gearbox, neither was "a women's car" Honda stated firmly. Note the jaunty hat and jeans. A stab at selling to the US lesbian community? Or an independent straight girl fed up with stereotypes. Good for Honda.