Video: Seven surreal places you have to see to believe 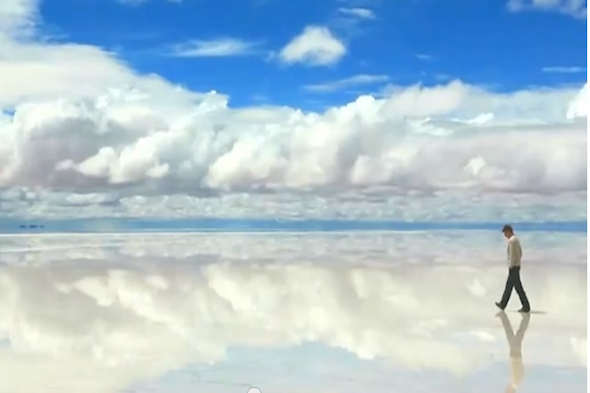 The world is full of strange and beautiful must-visit places to see before you die - and this video shows just a few of them. From the amazing rock formations of Cappadocia in Turkey to the salt flats of Bolivia, there are so many place to add to your holiday bucket list that you're going to need to take some serious time out to see them all. And if the video has whetted your appetite for out-of-the-ordinary places to visit, check out our slideshow below for some stunning pics.

The Cano Cristales is a river in Colombia which displays a vibrant explosion of colours for a short time each year. It happens when the water level drops and the sun warms the moss and algae at the bottom of the river, making the blooms turn bright red. The amazing transformation can be viewed for a few weeks from September to November.

Every year for a few weeks in February, Yosemite National Park's Horsetail Fall appears to turn into flowing lava in an extraordinary natural display. As the light hits the top of the rock face a miraculous transformation takes place. Suddenly the rock glows a breathtaking orange and red, appearing more like a volcano than a waterfall. The incredible phenomenon occurs only in February at Horsetail Fall, a seasonal waterfall which is part of the El Capitan rock formation.
The Gothic-style Kromlauer Park in Germany is home to the ancient Devil's Bridge, which is said to have been built around 1860. A unique feature of the bridge is its reflection on the water's surface creating a perfect circle.
Brazil's Lencois Maranhenses National Park is an ecosystem formed of sand dunes, known as white sheets (lencois) and freshwater lakes of changing colours. The seasonal lagoons fill with rainwater, mainly during the first six months of the year, creating a unique landscape. The National Park was formed over thousands of years and is actually a desert. It is home to a variety of fish, despite the almost complete disappearance of water during the dry season.
Its stunning mountain scenery inspired the film Avatar and the Zhangjiajie National Forest Park is one of China's most breathtaking spots, with its floating pillar-like formations and dense foliage. One of its towers, the 3,544ft Southern Sky Column, was even renamed the Avatar Hallelujah Mountain following the movie's success.
Fly Geyser is a man-made geothermal geyser reaching around five feet high in Washoe County, Nevada. It sits on a seven-foot mound and was created accidentally when drilling took place at the point in an attempt to find sources of geothermal energy in 1964. Although people are not entirely sure why it occurred, it was most likely due to the well being left unplugged, leading to the accumulation of dissolved minerals which rose to the surface and created the mound on which the geyser sits. Plumes of hot water continuously spew up to five feet in the air, which fills the numerous surrounding terraces of pools with water. It is the brilliant green and red colouring caused by thermophilic algae which makes the geyser so remarkable.
Dark Hedges is a beautiful avenue of beech trees dating back to the 18th century. The eerie avenue, in Northern Ireland, is said to be haunted by the 'Grey Lady' who appears at dusk among the trees and silently glides along the roadside.

At Conrad Maldives Rangali Island in the Maldives, guests can witness the phenomenal natural wonder that is bio-luminescent phytoplankton making the beaches glow blue at night. The bioluminescent blue glow is created by millions of phytoplanktons, more specifically the dinoflagellates, in the ocean. These contain luciferase, a chemical that glows in the dark when agitated - for example when a wave breaks on a beach. The blue glowing beaches are seen particularly on moonless nights. Guests at the resort can simply walk along the beach or go on night dives to swim through the glowing 'ocean of stars'.

One of the world's most amazing cave networks is the enchanting underworld Marble Caves in Chilean Patagonia's General Carrera Lake. Visitors who make the journey to the remote caves are treated to a unique light show caused by the reflection of the azure water on the marble walls. The incredible blue hues make the caves appear as something from another planet.
This mystery rock formation in the Abel Tasman National Park in New Zealand's South Island is in the shape of an apple which has been cut in half. Split Apple Rock sits in shallow water at low tide and according to geologists, the rock split in the Ice Ages when water seeped into a crack.
Up Next