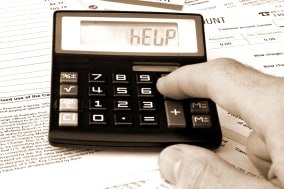 The number of households owing more than two months rent increased by an estimated 2,000 in the last three months of 2013, from a total of 65,000 in the previous quarter, according to the latest "tenant arrears tracker" from LSL Property Services.
The network, which owns national chains Your Move and Reeds Rains, as well as receivers Templeton LPA, based its projections for the whole of the private rental sector on the thousands of properties it manages.

The proportion of tenants thought to be in severe arrears accounts for one in every 62 (1.6%) tenancies across the country, creeping up from one in 66 (1.5%) in the previous quarter.

But the estimated number of severe cases has seen a sharp improvement from the same period a year earlier, when one in every 45 (2.2%) tenancies were estimated to be in arrears of more than two months.

The plight of those struggling with severe difficulties contrasts with an improving picture of tenants' finances generally. According to LSL, 6.6% of all rent was late or unpaid in November last year, down from 7.1% the previous month, amid wider signs that some of the gloom hanging over households' budgets is lifting.

LSL's study was released as figures from the Office for National Statistics (ONS) showed that inflation dropped to the Bank of England's target of 2% for the first time in over four years in December as food price rises eased, although some price hikes announced by energy companies in recent months have yet to impact fully on the figures.

Previous studies from LSL have shown that average rents have continued to increase amid strong demand from tenants and a lack of homes to choose from, despite more people managing to move out of the sector and make the jump onto the property ladder in recent months following the launch of Government initiatives such as Help to Buy.

According to LSL's latest buy-to-let figures, rents rose by 1.6% in the 12 months to November to reach £753 a month, compared with annual growth in weekly earnings of just 0.8%.

Debt advice charity the Money Advice Trust warned in December that rent arrears is the fastest-growing problem it is seeing. The charity previously said its helpline received 20,000 calls between
January and October last year from people behind with their rent, compared with 8,000 calls over the same period in 2007.

David Brown, commercial director of LSL Property Services, said: "Even as rents rise, the trend of the last five years indicates most tenants can increasingly afford to live in the private rented sector.

"Wages will probably start to pick up in 2014, allowing overall tenant arrears of all levels to keep falling.

"However, today's biggest risk for the private rented sector is a small minority of tenants who are in a very different financial boat - still struggling with several months of late rent.

"For these households, any signs of economic growth have been confined to the pages of a newspaper, and are yet to make their wallets any fatter."

Rent arrears figures revealed
Up Next

Jane Park is the coolest mommy on TikTok