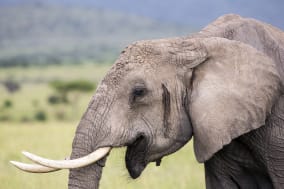 %VIRTUAL-SkimlinksPromo%More than 3,300 pieces of ivory and almost 50 elephant tusks have been discovered for sale on the Burmese border with China.

The discovery, made by an undercover team from wildlife trade monitoring network Traffic and Oxford Brookes University, comes just a week after China destroyed a stockpile of illegal ivory to mark its commitment to ending the illicit trade.
The ivory was openly on sale in the town of Mong La, a town in Burma on the border with China, which is regularly visited by Chinese nationals.

Ivory trade is largely illegal in Burma, and trading across the border is banned under international agreement. China has a limited legal trade in ivory but it can only be purchased from registered outlets in the country with certificates declaring the products are legal.

Traffic said the carved ivory pieces were thought to come into the town from China and originate in Africa, and the volume of ivory was on the increase, with more on sale than at any time since it started monitoring wildlife trade in the town in 2006.

Professor Vincent Nijman, from Oxford Brookes, said: "Our observations suggest Mong La may be one of the biggest unregulated markets in Asia, and it is doubtless one of those where ivory is most openly displayed."

He said it was clear that neither China nor Burma were effectively enforcing international regulations under the Convention on International Trade in Endangered Species (Cites), as ivory was evidently moving across the border.

Dr Chris Shepherd, director of Traffic in South East Asia said: "Increasing volumes of ivory in an open cross-border market catering to Chinese consumers is a sure sign that international agreements are not being enforced and action to reduce ivory demand is not effective."

He called on the government in Burma to take swift action to close down the illicit trade, and for China to help its neighbour carry out enforcement action.