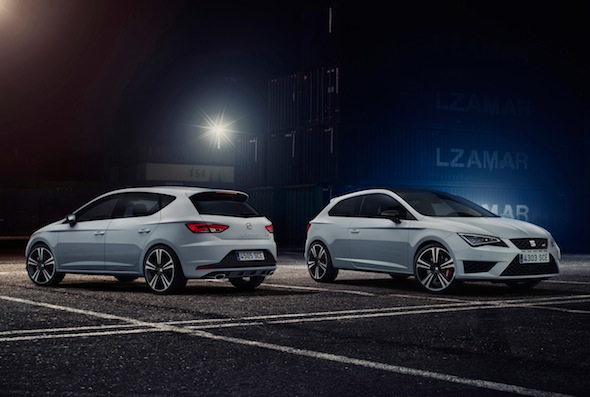 The Spanish manufacturer has just taken the wraps off two high-performance version of its popular Leon hatchback.
The Cupra and Cupra 280 will both feature a new 2.0-litre engine that has been fettled to kick out 261bhp or 276bhp in the most powerful Leon Cupra 280 model (named due to the 280PS it produces).

Focussing on the latter, we can reveal that the molten-hot hot hatch will tackle the 0-62mph sprint time in 5.8 seconds (reduced to 5.7 seconds when the seven-speed DSG gearbox is selected) and go on to an electronicall limited top speed of 155mph.

But don't think the Cupra 280 is simply a fuel-guzzling mean machine, it actually returns an impressive 44.1mpg on the combined cycle and produces just 149g/km CO2.

Exterior styling is fairly subdued compared to some of the rivals on the hot hatch market, with fellow road-users distinguishing the potent models by their full LED headlights, rear diffuser and oval tailpipes.

On the inside, the Cupra and Cupra 280 receive a unique sports steering wheel, Alcantara-finished sports seats and aluminium pedals.

Prices start at £25,690 for the standard Seat Leon SC Cupra and rise to £28,525 for the Cupra 280 DSG. Those figures make the Leon Cupra a fairly expensive proposition as the critically-accliamed Ford Focus ST with its 246bhp and superb chassis can be had for as little as £21,995.

Volkswagen's Golf GTI starts at £26,125 but falls down on the power front, boasting just 216bhp. Vauxhall's Astra VXR can match the Cupra 280 in terms of performance and comes in at a wallet-pleasing £26,995 but its poor handling, overly firm ride and cheap interior let it down.

The jury is still out on whether the Leon Cupra 280 is a proper driver's car but we're predicting that the inclusion of a front-axle differential lock, Dynamic Chassis Control and lighter underpinnings will strongly work in its favour.