Rocketing house prices is what the government wants 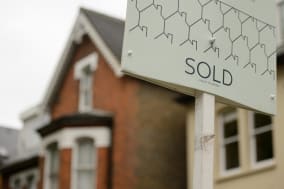 Politicians and housing experts have been playing down a house price bubble stating that we are well off 2007 levels, but everyone seems to be forgetting what happened after we hit the highs of six years ago.

New figures from HM Revenue & Customs (HMRC) show there were 107,380 property transactions in November 2013, up 23.5% from the same month last year and 1.5% from October.
Transactions are at their highest since December 2007 thanks to Funding for Lending Scheme which has kept mortgage rates low, Help to Buy which has made mortgages accessible for those with small deposits, and low interest rates which have benefited those on tracker mortgages who have been repaying at historically low rates.

And the rise isn't expected to halt in 2014, with the most optimistic experts predicting an 8% rise in prices next year, which would add around £20,000 to the average house price of £247,000 as calculated by the Office of National Statistics.

The soaring prices are being seen as a marker of recovery with the peaks of 2007 the ultimate benchmark but why on earth would we want to get back to those levels. For homeowners the rise is good news (who doesn't want to see their house worth more?) but we should be careful what we wish for.

It seems we have a short collective memory, forgetting that the biggest global crisis for 100 years followed the last property boom, but we are being swept away again by the promise of a property windfall.

And the government is happy for us to be swept away, despite what the ultimate outcome may be. If house prices are rising then confidence is increased (us Brits love seeing the price of our castle creep up), if we are confidence in our property situation then we are likely to spend more, and people will be forced to borrow more if they want to buy their own castle, and of course the government benefits if house prices are higher because they take more in tax.

In 2012/13 the government collected £4 billion in stamp duty – a not insignificant sum – and if houses cost more and more people are able to buy then it will collect even more.

It's in the government's interest for us to push up house prices but we have to remember the lessons we have learnt from our recent history and heed the warnings.

Rocketing house prices is what the government wants
Up Next