A fortune in toys lurking in the loft? 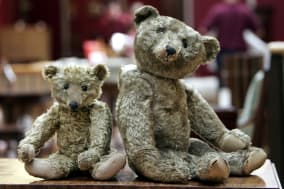 As you drag the Christmas decorations up the loft ladder again this January, the chances are that you'll have to clamber over several boxes of old rubbish. However, if you have some of your childhood toys in those boxes, then you could have a fortune lurking in the loft.

So where is the money in toys?

%VIRTUAL-SkimlinksPromo%
When you're searching through the dusty old boxes there are a number of things to look for.

1. Popular toys still in the box
If something was a runaway success, then most children will have bought it and played with it to death. Examples in perfect condition in their original packaging will be rare and therefore may be valuable. Original Star Wars toys are a great example here.

2. Accidents
If there's a manufacturing error that made it all the way to the toy shelves for a limited run, it can sometimes make the item more collectible. This was certainly the case for the royal blue Beanie Baby elephant. It was meant to be light blue, but in 1995 a limited number sold that were a shade darker, and they have become one of the most collectible of the range.

3. Dinky Toys
The 1970s toys are so popular that they don't need to be in the original box to be worth something. Prices have been rising ever since they were sold, and an unusual item could be worth several thousands of pounds.

4. Corgi Cars
Collectors love these, so if you have something unusual you could be in luck. One thing to watch for is cars that were only ever sold in sets, which would mean most people were priced out of buying them, and their rarity makes them attractive for collectors. Of course, if you have the original box then the price will rise considerably.

5. Steiff bears
These are highly collectible, with some of the rarest fetching more than £100,000.

6. Barbie dolls
Again you're looking for a rare doll, such as a 1950s original in perfect condition, or a Barbie with a short production run with all her clothes and accessories, which could be worth hundreds of pounds.

7. Lead figures
These were very popular until the 1950s, so nostalgia has driven many people to collect them. Among the most collectible are those made by Britain's, which include soldiers and animals. You will need the figures to be in great condition, and ideally they should be boxed. An older boxed set can fetch as much as £4,000.

If you have something you think is valuable, it's worth looking online for a local expert and seeking their advice. Your local auction house may have a specialist, and if not, they will be able to direct you to your nearest one.

Movement could mean a welcome break for England cricketers

Kids Tell Us What They’ve Missed During Lockdown