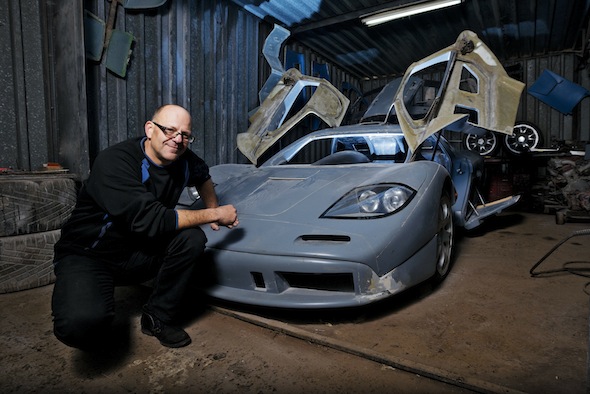 An amateur mechanic has created a replica McLaren F1 in his garage out of scrap and spare parts.
48-year-old Polish national Jacek Mazur spent eight years on his creation

It's not just for show either. With a top speed of 200mph, this one-off car has the speed to rival most modern-day supercars.

And best of all, his own interpretation of the British supercar set him back just £20,000. Given that mint examples of the actual F1 supercar now change hands for around £5million, it's one hell of a saving.

Jacek's McLaren is not the only faithful fake he has in the garage, the keen car enthusiast – who is not a professional engineer or even mechanic – has previously built his own Lamborghini Countach and Porsche 911.

Mr Mazur, a health-and-safety advisor, said "As soon as I saw the McLaren F1 for the first time, I knew I had to have one. I couldn't afford it so I knew I would have to build one myself," reported the Daily Mail.

"Now when I am in my car people just stop and start taking pictures.

"It is like being on a date with Angelina Jolie or Sandra Bullock in the centre of New York."

Like the real McLaren, Jacek's car features a 12-cylinder BMW engine, but has parts donated from other cars, including the brakes from a Mercedes-Benz.

It also has three-abreast seating, just like the real thing. However, Jacek has gone to the trouble of installing a fourth child seat in the rear – something he says is for the host of his favourite TV show, Top Gear's Richard Hammond.

"I named it the Hamonda in his honour. It is the same size as for a child but I'm sure Richard could be a fit," he said.

Click play below to see a film of Jacek creating his car.