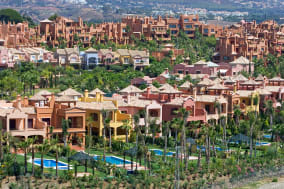 Thousands of British-owned homes in Spain remain at risk from demolition from the authorities. It's estimated there could be 1m properties Spanish properties deemed illegal due to construction industry, developer and town hall backhanders.

Even the Foreign Office has admitted it's a "substantial problem" for many Brits. If you're at risk, what can you do? %VIRTUAL-SkimlinksPromo%

First, if you're thinking of buying - and many Brits will be, given the slump in property values in many parts of Spain - you should look at Foreign Office guidance, which includes advice from the Association of Property and Mercantile Registrars of Spain.

Earlier this year a British couple had their €200,000 three-bed Spanish villa bulldozed by Andalusian authorities. "We can't believe this actually happened, even after a court ruled that we were blameless in this and had acted in good faith," Mr Brooks, 73, a retired sales manager told the Telegraph at the time.

The ex-mayor of Cantoria, Pedro Llamas, has already been sent to prison, jailed for issuing illegal building licences for developments built on protected land. Both the mayor and the developer, Francisco Pedrosa, were supposed to pay compensation to the Brit couple but both declared themselves bankrupt. So the Brooks' look unlikely to be compensated.

If you suspect you've already bought an illegal property then there is very little the UK authorities can do. You're at the mercy of Spanish law. Nor is there any sign, yet, of an amnesty from the Spanish authorities. Many Brits remain locked in expensive legal battles for compensation.

Technically, homeowners should be protected, even in Spanish law, by the principle of public faith in the registry. Unfortunately, arguing that principle so far has not been a success for some. Meanwhile the Spanish Land Registry says "The Spanish Registry System is, without doubt, one of the safest in the world."

Recently there were fresh accusations that the Spanish government was luring more Brits to committing cash to more high risk property investments. Last month the Mail claimed that the country's official register of houses included some which have been built without planning permission.

Make sure your home's insured – get a quote now