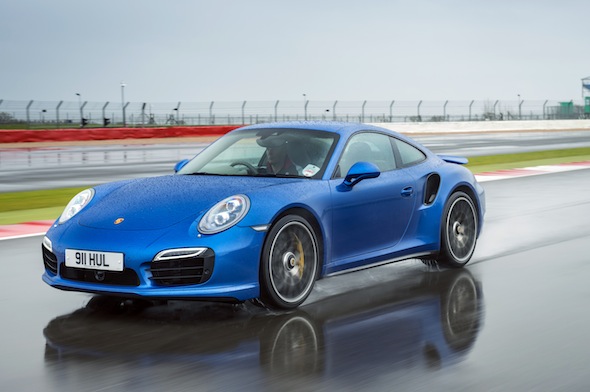 Porsche has been busy this year, launching updates of the 911, Cayman, Cayenne and Panamera models to ensure its rampant domination of the sports car and luxury SUV market continues.
Last but certainly not least are the epic 911 Turbo and Turbo S models, which have both undergone some typically understated exterior styling tweaks. But the updates underneath the skin will be the most interesting to potential customers. We took to a sopping wet Silverstone Circuit to see if these changes have been worth it...

The iconic 911 Turbo celebrates its 40th birthday next year and despite hitting middle age, it hasn't lost any of the ferocious notoriety that has previously made the model so popular. The latest 911 Turbo packs 512bhp underneath that shapely rump, while the Turbo S manages a heady 552bhp. The 991 911 (that's not a phone number, by the way) features some crafty innovations, including rear axle steering, a retractable front spoiler and improved interior displays.

Just one engine is on offer in two states of tune but it has been thoroughly tweaked to improve performance while cutting down on emissions and fuel consumption. The standard 911 Turbo features a 3.8-litre twin-turbo lump that is good for 0-62mph in just 3.2 seconds. Opt for the S model – and part with a further £22k – and power is pumped up to an almighty 552bhp, all of which is channelled to all four wheels for unrivalled amounts of grip.

This car sits at the very top of Porsche's sports car range and costs an eye-watering £140,852 in its most powerful state so it understandably boasts an impressive array of gizmos and gadgets. Porsche's adaptive cruise control is particularly welcome for those owners who wish to use their vehicle every day, while improved displays make the interior an even more pleasant place to while away the miles. Expect ceramic brakes, LED lights, 20-inch wheels and 18-way adjustable seats to feature as standard on the S model but, being Porsche, the options list is still begging to be raided.

Customers on the hunt for a high performance machine in this sort of price bracket are fairly spoilt for choice. Audi's brilliant R8 V10 remains an exceptional drivers car and boasts the all-weather performance prowess only four-wheel drive can offer. Nissan's GT-R doesn't share the prestige appearance nor the badge snobbery of the Porsche but it can certainly keep pace, while Aston Martin's much improved V12 Vantage offers a hefty dollop of cool for similar money - but be prepared for reliability niggles and a very different beast to tame should you venture on track.

Some would argue that the layers of technology Porsche has lavished on its latest Turbo somewhat takes away from the raw and visceral driving experience that the Turbos of old offered but to that we say: "buy a GT3". This 991 Turbo is an absolute dream to drive and even on a soaking wet Silverstone circuit during Biblical storms, it managed to negotiate corners like a Scalextric model. Thanks to rear axle steering - that turns the rear wheels parallel to the front up to 1 degrees at speeds over 49mph – and that four-wheel-drive system, even the most ham-fisted driver is made to look like Sebastian Vettel on a really good day. The engineers at Stuttgart have worked wonders with the seemingly minute changes made, the longer wheelbase adding even more poise and composure to an already accomplished model while retaining the everyday usability that will appeal to so many.

Although Porsche has clearly gone to great efforts to make the latest 911 Turbo an even more 'useable' supercar, it hasn't lost that edge that made previous generations so notorious - turn off all the safety systems and you still have one very angry machine on your hands. Factor in the heavily flared wheel arches, aggressive rear wing and monster alloys and you are left with one extremely attractive package.