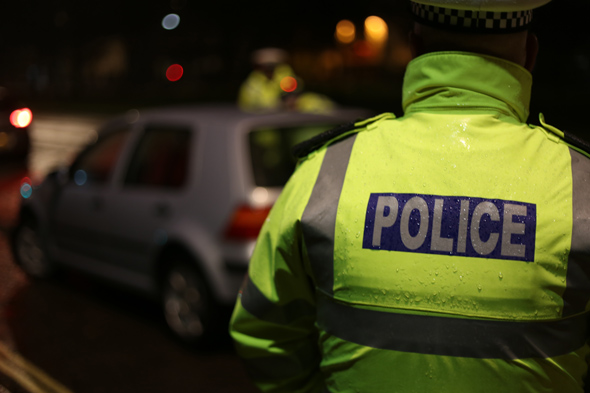 As the Christmas party season begins and the urge to sneak a quick pint in after work increases, so too does the temptation to get behind the wheel after a drink.> At this time of year police forces are cracking down even harder on offenders. In Hampshire, Operation Holly is running throughout December and sees large numbers of officers setting up roadside checks across the county. AOL Cars was invited to spend the night with the roads policing team to see what happens.

1900: We're in the briefing room in Totton Police Station, Southampton, and Sgt Glen Barham MBE is briefing the team. Around 20 officers, including a number of volunteer 'Specials', will set up two roadside stop and check zones in the city centre. The idea is to be as "visible as possible" and a successful night will be one that "catches no drink drivers". 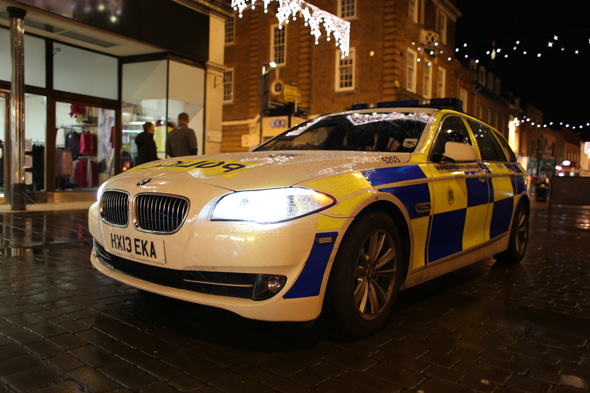 1945: We're introduced to Insp Kirsty Shannon, in overall charge of the traffic policing division, and Sgt Lyndon Barrett, who'll be our driver. We jump in the back of a 13-plate BMW 530d and set off towards Winchester. The roadside checks will start at 2100, but before then they've got something they want us to see.

2000: In Winchester a smashed Subaru Justy is on display and is a stark example of the dangers of drink driving. Sgt Barrett tells us the story of Evey Staley, a 10-year-old from the Isle of Wight. She was in the back when it was hit by Robert Blakely. He was more than twice the legal drink drive limit and had been smoking cannabis when he hit the family's car as it pulled out of their drive. Evey sustained head injuries that were not survivable and her father, although seriously injured himself and with his wife in a coma, had to make the decision to allow doctors to turn off her life support. Blakely was sentenced to just 10 years in prison.

2010: Seeing the Staley's car and the damage drink driving can do puts tonight's operation in stark focus. It's a shocking story and sadly one that is not unusual. Sgt Barrett says: "No one gets in their car thinking they're going to kill someone after they've had a drink, but it happens and people need to think of the consequences."

2015: On the way back to Southampton I ask Insp Shannon who she believes are the worst offenders. "Predominantly older people," she explains. "Think 50 plus, yacht club set, driving posh cars like Jaguars, Mercedes, Audis. I'd say around 75 per cent are older people who drink drive." Sgt Barrett believes younger drivers are far more likely to drive while distracted: "They're constantly checking Facebook or Twitter and not concentrating on their driving."

2130: We arrive at the operation. Cones are set up in a bus lane with flashing blue lights and eight officers are standing in the rain pulling over cars at random. Insp Shannon explains: "The first thing officers will do is have a good sniff, if they can smell alcohol they'll breathalyse the driver. We have to have suspicion of drink driving before we can test them."

Sgt Barrett adds: "However, if they are committing a moving traffic violation – such as they have a light out – we automatically breathalyse them." Over the course of the evening, it's shocking how many drivers do have lights out. 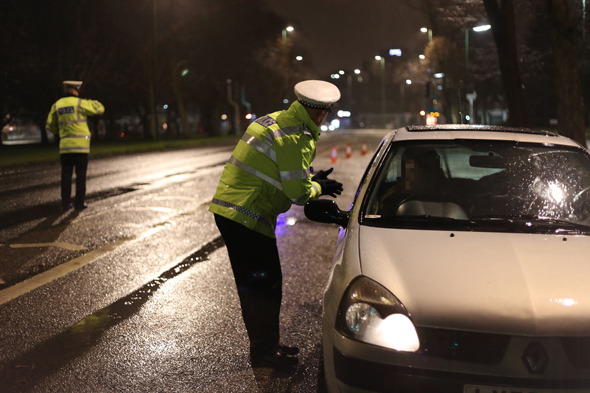 2237: The officers are pulling over a steady stream of drivers. It's amazing how many fail to spot the fluorescent-jacketed policemen and nearly run them down. A 12-plate Mercedes C63 AMG is stopped and his rear tyres have less than 1mm of tread on them. Facing three points and a £100 fine – for each illegal tyre – the driver's face drains of colour. After a grilling officers issue him with a notice that gives him 14 days to rectify the problem and prove to police it's been done. "He genuinely didn't know," said Sgt Barrett. "In some cases it's far better to advise and get the problem rectified than just hand out points and fines."

2245: A teenager in a Vauxhall is pulled over and officers think he's on drugs. They subject him to a FIT test – similar to the American sobriety test. He has to stand on one leg while counting, walk along a line toe to heel, and touch the end of his nose with his eyes closed. If he'd failed the roadside check, further tests would take place back at the station, but he passes and officers send him on his way.

2305: Sgt Barrett puts his hand in the air to stop a car and a following Volkswagen Golf nearly runs into the back of it. A crash is avoided by millimetres. Both drivers are pulled in and it soon becomes apparent why the Golf nearly crashed. The driver is THREE times the drink drive limit. To make matters worse the car's tax is out of date. The female driver, in her early 20s, is clearly drunk. She shouts and swears at the officers as they put her in the back of a car and take her away.

0100: The operation is wrapped up and hailed a success. In total 138 cars were stopped and checked at our location and a similar number were pulled over at the second – and only one drink driver was caught. Insp Shannon says: "That's good news – it means the message is getting through."

0105: On the way back to the station I ask Insp Shannon the question she's asked all too often – how many drinks are too many? "One," she replies. "My advice would be don't even have anything to drink if you're going to drive. The way alcohol affects people is so different – the only way to be safe is to have a soft drink instead. The consequences are just not worth risking."

AOL Cars' drink drive patrol with the police
Sgt Glen Barham MBE briefs the team on the night’s operation. He says a successful night will result in no arrests
The shocking story of Evey Staley, who was killed by a drink driver on the Isle of Wight, is on display in Winchester next to the car she died in. Many passers by are brought to tears by the story
The Subaru Justy the family were travelling in when the crash occurred. Evey Staley’s father had to make the heartbreaking decision to turn off his daughter’s life support, while his wife was still in a coma
Sgt Lyndon Barrett tells AOL Cars’ editor James Baggott the story of the horrific crash
Hampshire Constabulary traffic cars are equipped with ANPR which is constantly checking passing cars with cameras at the front and rear
James Baggott is kitted out with high visibility police gear by Insp Kirsty Shannon
Police cone off a bus lane in Southampton where drivers will be pulled over and their cars inspected
Officers advise motorists of faults with their cars and breathalyse the drivers
Police officers stand in the middle of the road to stop cars at random. It’s shocking how many fail to spot them and nearly run them down
Mercedes C63 AMG driver had rear tyres that were under and dangerously close to the legal limit. He’s given a warning and a notice to get it fixed in 14 days
It’s not just car drivers who are stopped. A Suzuki GSX-R1000 is pulled over and checked over
Sgt Lyndon Barrett, who is trained in the roadside FIT test which can highlight drivers under the influence of drugs, checks a driver. He passed the test
The moment officers realise a VW Golf driver is over the limit. She’s arrested and it later transpires she was three times the limit
VW Golf driver shouts and swears at officers before bursting into tears in the back of the police car as her offence sinks in
Offender's Golf, which was also untaxed, is towed away by force’s recovery agency
James grabs a cup of tea and dries out in the force’s roadside unit while a volunteer officer checks car details on the police database
Up Next