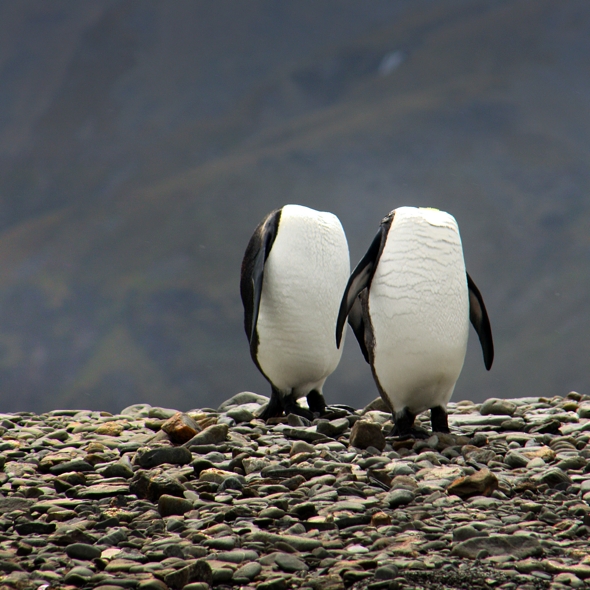 These birds might look how most of us feel with Christmas preparations looming but luckily, despite appearances, they haven't really lost their heads.

The bizarre photograph appears to show two king penguins decapitated on the British overseas territory of South Georgia, in the South Atlantic.

In fact the shot is a trick of the lens as photographer Charles Kinsey, 64, reveals the birds thankfully just have their heads turned behind their backs preening themselves.

Charles, from Bristol, got the incredible snap during a trip to the remote island chain 2,500 miles from Antarctica.

Charles, a retired science teacher, told Caters News: "I do a lot of travelling - almost always to see wildlife - partly because I enjoy it enormously but partly because I can find out about conservation issues at first hand and take relevant photographs for talks which I do on conservation.

"I was with a group from the travel company Exodus - it was a photographic charter using the Russian research ship Vavilov and we spent about four days around South Georgia before going on to Antarctica. I had never been to either place before.

"I was walking around on the beach at Fortuna Bay - watching all the comings and goings of the penguins and fur seals.

"This was our first landing on the island of South Georgia and my head was spinning with everything that was going on.

"I did not really know which way to look or what to photograph. At one point, I just happened to be standing very close to the Exodus professional photographer Paul Goldstein when he spotted the two king penguins, about 15 metres away, with their heads behind their backs - almost certainly preening their back feathers.

"Paul alerted me by just pointing at them and saying 'Charles, take that now' They were only like that for a few seconds so I only had the chance of one shot.

"At the time, I realised that it was a great photographic opportunity as the pair were well positioned on a ridge of shingle on the beach with nothing to distract in the background.

"There are more King Penguins on South Georgia than anywhere else in the world. Later on we went to St Andrew's Bay where there were just thousands and thousands."

He added: "The extraordinary thing is that I see penguins every day when I am home as my flat in Clifton directly overlooks the penguin enclosure at Bristol Zoo.

"I get a very good view of them from my kitchen window when I am washing up. The Bristol Zoo penguins are all African penguins. They used to have a few kings but now specialise in the African ones."