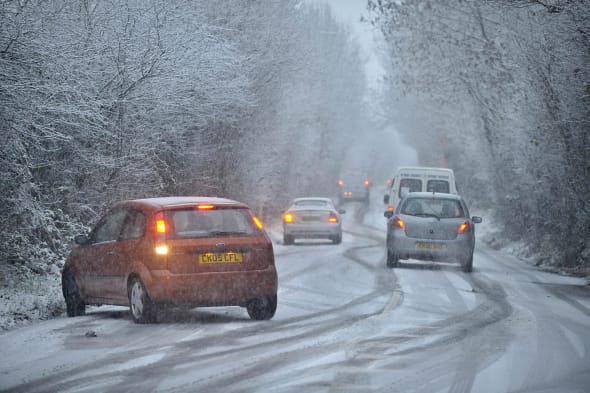 A handful of meteorologists are predicting that temperatures are set to plummet below freezing later this week, potentially causing havoc on roads up and down the country.
Motorists planning to venture out in the adverse conditions are being warned to prepare their vehicles properly by either fitting winter tyres or taking extra steps to ensure they don't get stuck in the snow.

Statistics show that motorists were unable to travel for an average of two days last year due to adverse weather conditions but despite these figures, many are still refusing to fit winter tyres (just 6 per cent of those surveyed said they would) and just 31 per cent questioned were prepared to carry essential equipment in the boot such as a tow rope and shovel.

The research, carried out by AXA Insurance, found that one in twenty of those questioned in its poll spent seven days or more unable to travel last year and 34 per cent of respondents missed one or more days off work due to bad weather.

Maxine Tighe, head of motor claims at AXA, commented: "Winter weather consistently causes serious problems in the UK, but our research shows that drivers are still being complacent."

She continued: "Winter has a massive impact on road safety, and it's not just snow that causes problems, ice and fog also make the roads more dangerous."

Tests conducted by various manufacturers, including Ford, have proven that winter tyres can improve stopping distances by up to 10 per cent in wet and icy conditions and up to 20 per cent in snow.

Many European countries, including: Germany, Sweden, Finland and Austria, have made fitting winter tyres compulsory by law while other countries recommend them or require drivers to carry snow chains in certain areas.

It seems UK road law has been slow to catch up with the rest of Europe.

Maxine Tighe added, "Drivers who prepare for winter will find it easier to travel in the cold and might just find that a little forward thinking – such as keeping a blanket and a phone charger in the car – could turn out to be a lifesaver".
Tags
Read Full Story Click here to comment