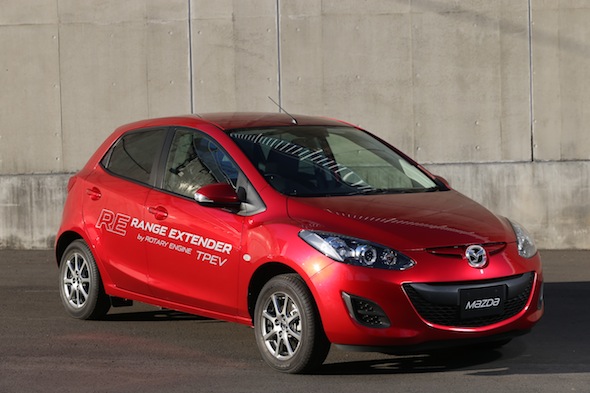 Take a quick glance at Mazda's line-up and you'd be forgiven for thinking it wasn't taking alternative fuelled cars very seriously. While other car manufacturers have ploughed ahead with electric, hybrid and plug-in hybrid variants, Mazda has decided to tread a different path, constantly refining its combustion engines to make them even greener.
While that will remain the case for the foreseeable future in the UK at least, elsewhere the brand is trying something different.

In Japan it is trailing a series of electric Mazda 2 models with the help of the government government and today launched its first hybrid Mazda 3 in its home market - a car that confusingly uses technology borrowed from a Toyota Prius.

AOL Cars headed to Yokohama, the second largest city in Japan, to try something else the manufacturer is cooking up – a range extending rotary-engined plug-in hybrid. Confused? Let us enlighten you.

A range extending rotary-engined, plug-in hybrid might sound like someone at Mazda has eaten a packet of Rowntree's Randoms and blurted out words, but it is in fact a very sensible way to power electric vehicles. Here's how it works: The car uses an electric motor to power the wheels and drive along the road. While you can charge it up from the wall in eight hours and travel around 125 miles, to extend the range a small rotary engine – similar technology as you used to find in an RX-8 – has been placed under the boot floor. This 330cc unit kicks in when it's needed above 6mph and recharges the battery on the go, but it never powers the wheels.

Cast your eyes where a normal engine sits and you'll find a 75kw motor that produces 100bhp and 150Nm. It means the car can hit 60mph in around 12 seconds and a top speed of 75mph. But keep searching and slotted behind the rear axle, under the boot floor, is the horizontally-mounted rotary engine. With a 10-litre fuel tank it can recharge the batteries on the move and double the range to 250 miles. Range extending technology is limited by law in Japan to only double a car's existing range (don't ask why), but if the technology is introduced elsewhere in the world, a larger tank could be installed. An engineer told us if the same size fuel tank from a standard Mazda 2 was fitted, the range extender could potentially travel 500 miles without stopping.

Very impressive. Mazda were extremely keen to point out this is a one-off development car that isn't scheduled for production (yet). Getting information out of the engineers was like getting blood out of a stone, but we did glean it will be around three years before something like this could make it onto UK roads. Considering we're not getting the standard Mazda 3 hybrid in the UK, a car which uses conventional technology, it's unlikely we'll get to buy one of these any time soon.

If we're talking rotary-engined plug-in hybrids, then no. There's talk of Audi doing something similar and showcasing it at next year's Geneva Motor Show, but Mazda got in there first. The Chevrolet Volt and Vauxhall Ampera are plug-in range extending hybrids, but their cost has severely put UK punters off.

Given we only had a five-minute stint behind the wheel in a car park, and we're not talking Ken Block car park antics, it's hard to tell you much more than that it works. The batteries were already fairly depleted in the car we drove so the range extending rotary unit kicked in quickly. In the back you could hear it fire up, but it was not intrusive and barely audible from the front seat. It's quick to accelerate and the regenerative braking is sharp. Inside it's just as comfortable as a standard Mazda 2 apart from the huge EMERGENCY button attached to the dash. This, I was assured, wasn't for near-miss situations, but for the test mule only.

Finding out what the Mazda development team had for lunch was hard enough, so any real detail on this new technology wasn't exactly forthcoming. They wouldn't tell us what CO2 emissions were, but one exec did say they hoped it would eventually duck under 15g/km. What was interesting was the research Mazda had carried out for the electric car trials they're running with the Japanese government. Of those users, 70 per cent were dissatisfied with the car's 125-mile range, despite the fact they never used it all. Mazda says it was this that led them to investigate range-extending technology further as they're not convinced pure electric cars are the future. That could be one thing that the Mazda engineers and AOL cars agrees on...