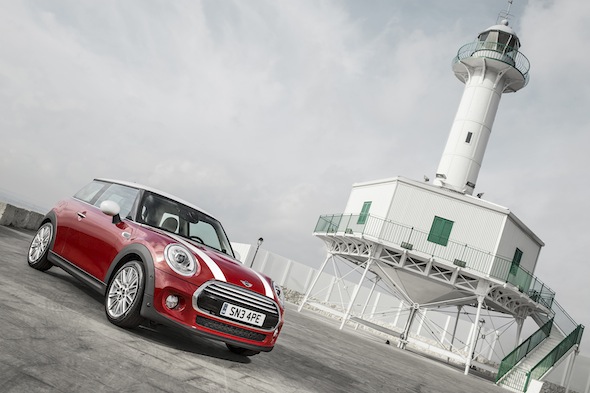 Today BMW/Mini unveiled the next-generation model of its iconic hatchback, in which the German-owned manufacturer has taken its dividing design to yet another level.
Although it still features a number of unmistakable brand characteristics, the original BMW model has undergone a full redesign.

The exterior has been noticeably reshaped with both the front and rear-end benefiting from prominent facelifts, while the interior now boasts a number of technical upgrades.

"This has possibly been the most emotional and rewarding Mini we've built yet," said head of design, Anders Warming. "Achieving the right balance of heritage and innovation has been a significant part in producing the next generation Mini hatchback."

Warming explained that while the new Mini is a completely new car, the design team has worked to build on the standard symbolic features, while introducing distinctive heritage elements we've yet to see on a modern Mini.

"While the Mini is a completely new car, we've enhanced the existing elements to ensure the car remains 100 per cent Mini - it resembles the classic Mini more than it's predecessor," he explained.

"The new larger grille is a perfect example of this - it's clearly a Mini but it's completely brand new." In fact, the new Mini is visually different from every angle - the side panels now consist of curved lines, while the rear has also been given a full facelift to couple its new distinctive vertical (and framed) tail lights, which originate from the newest family-member, the Mini Paceman.

"The original door handles and wing mirrors are still the same, but we've made them more accessible," said Warming.

"The car has been lengthened slightly, it features significant curves and crease lines which give a sense of speed whilst standing still and inside we've enabled driver interaction with the improved infotainment screen."

One change that will come as a shock to Mini drivers is the move of the symbolic central speedo, which no longer exists in the next generation's interior and has instead moved alongside the rev counter to form a cluster in front of the driver.


"The speedo, which is such a unique feature to Mini, has moved directly opposite the driver," said Warming.

"Unlike before, the infotainment screen now enables driver interaction by displaying a number of visual features from a virtual rev counter to highlighting changes in drive modes or displaying the control of the in-car temperature gauge."

It's not just the styling elements that have been given a makeover; the new Mini hatch will also come with the option of three brand new twin-powered turbo engines. Upgrading from the current 1.6-litre unit, the 2014 range will be powered by more powerful three and four-cylinder engines.

The Cooper and Cooper D and will downsize to more efficient 1.5-litre three-cylinder petrol and diesel engines, while the powerful Cooper S will run a larger 2.0-litre four-cylinder unit, which can produce up to 192hp.

"The next generation Mini is a completely new car," said brand director Chris Brownridge. "It features more efficient and more powerful drivetrains and the in-car equipment Mini is offering in this segment is what you'd usually find in luxury premium cars."

He added: "Every Mini has be to be fun to drive and exciting to own and the next generation model really reflects these values of ownership experience."

Bristol in ‘Tier 1 plus’ to control spread of coronavirus, mayor says