Rachel Hunter was spotted posing up a storm for a 'selfie' on the deck of her New Zealand holiday home this week.

The former model - and wife of Rod Stewart - is back for a second season as a judge on New Zealand's Got Talent along with Jennifer Lopez's ex-hubby, dancer Cris Judd. 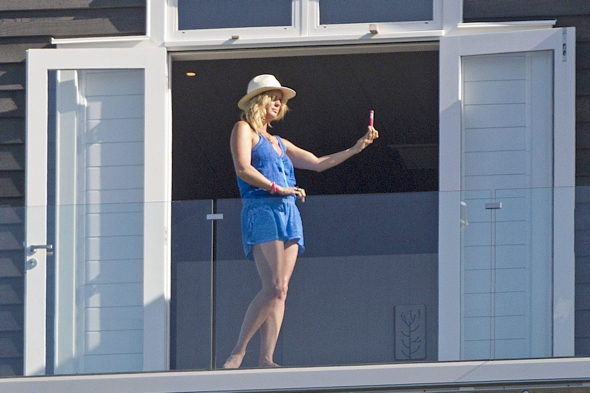 The star is now based in LA, but she was born and bred in Auckland, and has a holiday home on the beautiful Waiheke Island - just a 35-minute ferry ride from her home city.

The mum-of-two was spotted taking a selfie (or two) in a cornflower-blue playsuit and fedora hat as she enjoyed the balmy 22C spring temperatures.

Waiheke Island is the second largest in the Hauraki Gulf after the Great Barrier Island. It is a holiday hotspot for tourists and New Zealanders alike and is surrounded by beautiful beaches.

After staying at Elton John’s south of France home on their regular visits to the area, Victoria and David Beckham bought their own mansion, Le Domaine Saint-Vincent, in 2003 for £1.5 million. The pair fell in love with the 19th-century house that’s near the charming village of Bargemon in the Var. It’s said to feature 15 bedrooms, a swimming pool, chapel and a farm where the caretaker lives. Le Domaine Saint-Vincent is located in rural Provence and is just 25 miles away from the beaches of the Cote d’Azur for when Victoria wants to go shopping in Saint-Tropez or sunbathing in Antibes.

George Clooney’s Italian holiday home, Villa Oleandra has been in and out of the press since he bought the 30-room lakeside estate in 2001 for £6.5 million. It’s been host to some of the biggest A-list celebs including Brangelina and the Beckhams, has attracted swarms of paparazzi, made house prices on Lake Como rocket and was even the scene of a bomb scare! The villa is said to have an outdoor theater, large swimming pool, tennis courts and a garage for his motorcycles.

In 2010 George Michael fell in love with Australia and bought a £3.9 million holiday home near Sydney. The contemporary house boasts spectacular views of the sea, five bedrooms, an infinity pool and manicured gardens. The property is on Whale Beach Peninsula and also features a 40-foot open plan living room, a long reception, a study with a fireplace and huge glass doors to give an open feel within the house’s three levels.

After shooting the film The Tourist in beautiful Venice, Johnny Depp splashed out on the £8.5 million Palazzo Dona Sangiantoffetti, which dates back to the 17th century. The palace, set on Canal Grande was one of the only available buildings overlooking the canal when Depp bought it at the beginning of this year. The property was bought as another holiday home for the actor and his family, and needs restoring before they can settle in. Its features include high decorated ceilings, a roof platform and elaborate columns.

When supermodel Kate Moss isn’t out and about in London or off on a photoshoot somewhere exotic, she likes to spend time at her 10-bedroom Grade II-listed mansion in the Oxfordshire Cotswold village of Little Farringdon. Since buying the £2 million property in 2004, Kate’s been a regular in the village and has been spotted driving around in her black cab. She loves her holiday home so much that she even applied for planning permission to turn an old grain store on the estate into a guest room and wanted to open a pub in the area.

In 2009 Kylie Minogue showed just how serious she was about her boyfriend Andres Segura when she bought a £450,000 villa close to where his family live in Tossa de Mar on the Costa Brava. The singer’s low-key purchase in model Andres’ hometown is close to his dad’s bar and restaurant, which he plans to take over in the future. Kylie once stunned locals when she put in a shift at the bar!

The actor and musician bought their home in the exclusive Amagansett hamlet in New York’s Hamptons in 2006 for $5.4 million. The house’s features include minimalist and feminine interiors, a swimming pool, a large kitchen and five bedrooms. It was designed by Gwyneth who wanted the home to be functional for her family and reflect her individual style.

After years of searching for the perfect holiday retreat, Prince Charles and the Duchess of Cornwall bought the £1.2 million Llwynywermod farmhouse in 2006. The three-bedroom estate in Wales’ Brecon Beacons National Park is set in a 190-acre organic farm and includes tasteful and elegant interiors, classic Welsh furniture and clues of its owners scattered throughout the house – there’s a Royal crest above the fireplace! When the prince is away you can rent the stone farmhouse that’s complete with a master bedroom, twin beds, a vaulted dining hall and a cosy living room.

Wayne and Coleen Rooney enjoy nothing better than lounging in their £5 million whitewashed villa in Barbados when they’re in need of a holiday. The footballer and his WAG bought the ultra-luxe property on the island’s Royal Westmoreland development in 2010. The villa boasts six bedrooms, gorgeous sea views, an infinity pool and colonial-style interiors. As well as the main house, there’s a detached two-bedroom cottage for any extra guests the Rooneys invite and they have a host of celebrity neighbours including Rio Ferdinand, Gary Lineker and Freddie Flintoff.

When the Sex and the City star and her husband need a break from New York’s Manhattan they head to their Irish holiday home in the quaint village of Kilcar, Donegal. The cottage is in the same area where Matthew Broderick’s family lives and is visited by the actors over the summer. Sarah Jessica Parker is said to have liked Ireland so much that she wanted to move there permanently, where she could learn to knit!

Video: Beachgoers from 'human chain' to save boy from drowning at NZ beach