Bruce Forsyth approached by beggar outside museum in Florence 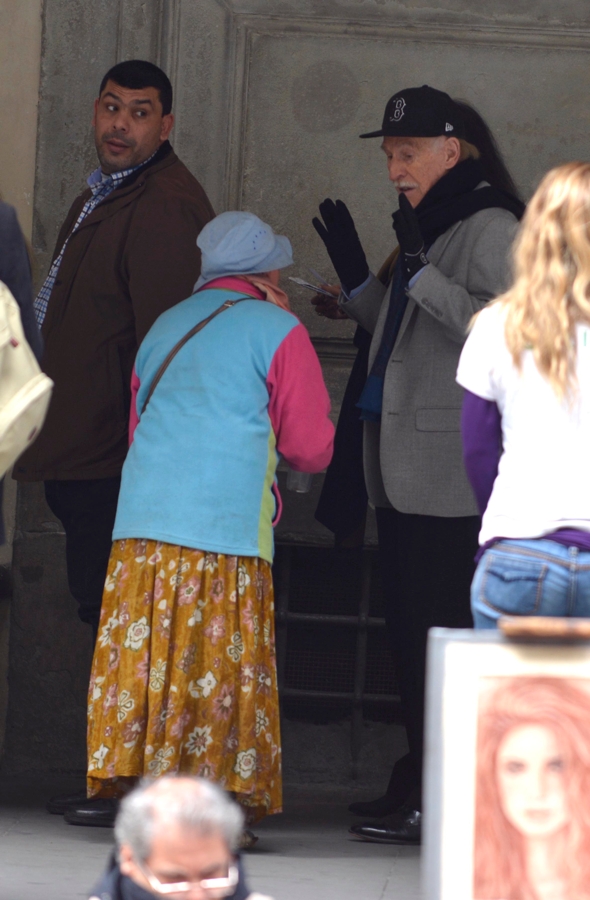 Strictly Coming Dancing star Bruce Forsyth and his wife Wilnelia Merced were accosted by a beggar in front of other tourists during their holiday in Italy this week.

The pair were standing in line to enter Florence's world-renowned Uffizi gallery on their culture break.

The 85-year-old entertainer was next to his former Miss World wife when the elderly beggar asked him for money, the Daily Mail reports.

Brucie pretended to be shocked at being approached and hassled on his holiday.

But the veteran TV host soon showed his soft side and gave the Roma woman some money. 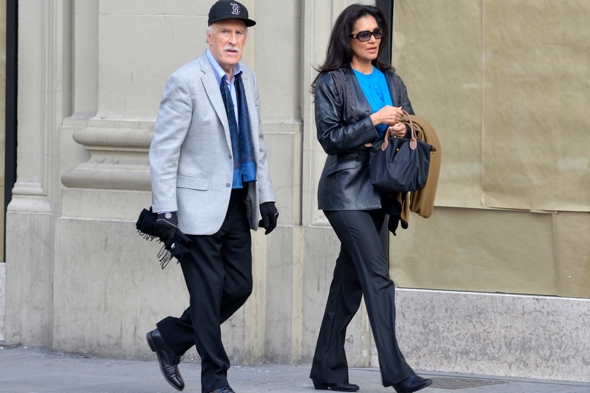 Speaking to the Daily Mail, a witness said: "The gypsy woman asked him for money, and Bruce threw up his hands pretending to be terrified.

"He was just joking, messing around, but the woman moved on.

"Then afterwards he saw her in the piazza, and said something to her. He was smiling, and put something in her hand."

Bruce and Wilnelia were enjoying a short break from his busy schedule in the Italian city.

Other celebs who have enjoyed trips to Florence include Jennifer Love Hewitt, Teri Hatcher and Kim Kardashian.

This summer Tom Cruise's daughter Bella visited the city and travelled with Ryanair instead of taking her dad's private jet.

10 PHOTOS
Secret Italy: Where to escape the crowds
See Gallery

Bruce Forsyth approached by beggar outside museum in Florence
Secluded Lake Orta has as much beauty as Italy's higher-profile lakes but is far less touristy, making it perfect for a romantic break. It's just seven miles long and a mile wide, and in the middle lies the Isola San Giulio which is home to a convent. The lake's hill town, Orta San Giulio is a real treat with winding cobbled lanes, fishing boats pulled up to the waterfront and the 16th-century Palazzo Penotti Ubertini arts space. How to get there: Around 1.5 hours' drive from Milan
Ostuni, the 'White City', is famed for its whitewashed houses overlooking the gorgeous Ionian Sea. Its pretty old town offers a plethora of bars, cafes and restaurants, and keen shoppers shouldn't miss the antiques market held every second Sunday of the month, with everything from jewellery to books and furniture on sale. Travel around 25 August when Ostuni's locals celebrate La Cavalcata, with a parade of horsemen dressed in red and white taking to the streets. How to get there: Around 50 minutes' drive from Brindisi
Avid skiers should head to Abruzzo's Roccaraso ski resort for over 120km of piste to enjoy. It's not just a cheaper alternative to the Alps but a real hidden gem as most skiers don't think of heading to Italy's south for its slopes. The picturesque resort is surrounded by beech woods and is one of the few places you can escape the crowds and experience empty pistes. How to get there: Around 1.5 hours from Pescara
Popular with Italian families from southern Italy who flock here in the summer, Praia a Mare on the coast of Cosenza has beautiful beaches and crystal blue waters. Just off its shore is Dino Island, where you'll find three sea caves to explore. It's the ideal place to bring the kids for a laid-back family holiday or for adventurous travellers who can try their hand at scuba diving or cliff jumping into the sea. How to get there: Around 2.5 hours from Naples
The tiny village of Castelmezzano is perfect for a day trip you won't forget. It's overlooked by rugged mountains and great for getting a taste of how southern Italians live - picture old men chatting on street benches. It's also the place where thrill-seekers can take to one of Europe's fastest and highest zip-wires The Flight of the Angel, which releases the brave 400m above ground. How to get there: Around 2.5 hours' drive from Naples or Bari
Just a weekend break in the mountain town of Bergamo is enough to fall in love with its impressive art and architecture, and a must-see is the 12th-century Santa Maria Maggiore church for its stunning, ornate interior. Just north of Bergamo is the charming Lake Iseo: a great alternative to the popular Lakes Como and Garda and surrounded by countryside, vineyards and medieval castles. How to get there: Around 50 minutes' drive from Milan
Ponza is the largest of the Pontine Islands and the place to see real Italy while rubbing shoulders with wealthy yacht owners. The main areas are Ponza Porto, a vibrant harbour with a variety of bars and restaurants, and Le Forna in the north with its natural pools and beautiful white cliffs. How to get there: Around 3 hours' drive from Rome (including ferry trip)
Avoid the crowds of the Amalfi coast and head to Cilento in Salerno for its unspoilt beaches and mountains. The biggest attraction is the Vallo di Diano National Park, which is the second biggest national park in Italy and boasts natural beauty, wild mountains and beautiful coastline. For foodies, Tenuta Vannulo, an organic water buffalo farm is a must-visit where you can see buffalo milk transformed into mozzarella. How to get there: Around 2 hours' drive from Naples
The spa town of Saturnia is nestled in the unspoilt Maremma region of Tuscany and known for its hot thermal springs. Legend has it that they were created when Saturn was angry and sent down lightning to the town. There are hotels in the area offering use of their thermal pools but for an authentic spa experience you should go to the river where you'll find local Italian families bathing in the cascades of the springs. How to get there: Around 2.5 hours' drive from Rome
Famous for its baroque architecture and being a UNESCO World Heritage Site, Noto in Syracusa is made up of crumbling palaces, houses and churches that were restored after an earthquake hit the city in 1693. Just taking in the beauty of its 18th-century buildings, wandering the narrow streets and sipping Noto's famous wine made from Nero d'Avola grapes will give you a real taste of Sicily. How to get there: Around 1.5 hours from Catania
Up Next

British tourists paid how much for ice cream in Rome?