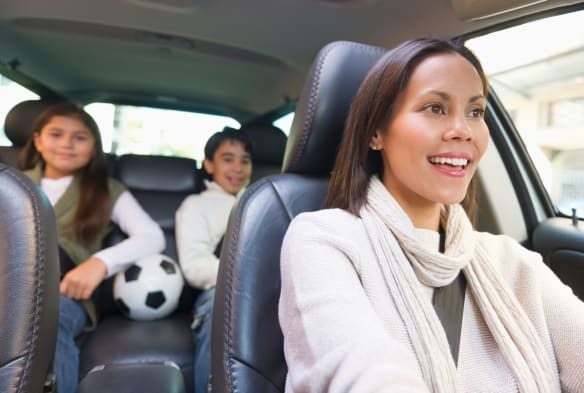 New research carried out by Monash University Accident research Centre in Melbourne has revealed that children are 12 times more distracting in the car than talking on a mobile phone while behind the wheel.
The recent study, which is the first of its kind to analyse the extent to which kids in the backseat distract parents, shows that motorists spend 20 per cent of each journey taking their eyes off the road to check on children, either directly or in the rear-view mirror.

In order to carry out the study, researchers recruited 12 families with an average of two children aged between one to eight years of age.

They then fitted their cars with cameras to monitor everyday driving habits across a three-week period.

According to the University Herald, during 90 of the 92 short trips recorded by the cameras, drivers became distracted when a child was in the car. Meanwhile, roughly 76 per cent of time, drivers looked directly at their children or checked on them in the mirror.

While these actions alone increase the risk of a crash, other distractions included talking to a child, reaching round to assist a child or in more extreme cases, actually playing with them while en route.

In fact, the study found the average parent takes their eyes off the road for three minutes and 22 seconds during a 16-minute journey.

Professor Judith Charlton, from the university's Accident Research Centre, said in an official statement: "Drivers often don't consider their own children to be a distraction. This highlights the need for education about the risks of focusing on their children rather than the road.

"The costs of distracted driving are undeniable. One major and previously unrecognised distraction is kids in the backseat."

According to the Daily Mail, experts have calculated that a driver on the phone travelling at 65mph needs an extra six-and-a-half feet to come to a stop, in comparison to someone who was fully concentrating on the road ahead.

Kevin Clinton, head of road safety at The Royal Society for the Prevention of Accidents told the Mail Online: "A key difference is that parents have to drive with their children, whereas they do not need to use a mobile phone while driving.

"Using a mobile phone while at the wheel is an avoidable and dangerous distraction.

"Having said that, parents do have to manage the distraction caused by child passengers, and if children are getting too boisterous or fractious, the driver should find somewhere safe to stop to deal with the situation."
Tags
Read Full Story