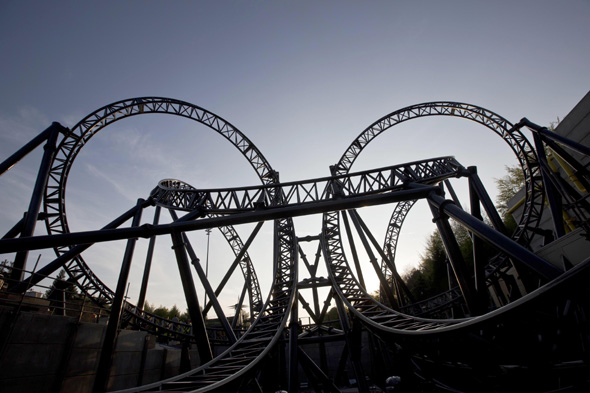 Alton Towers' newest rollercoaster was forced to close when the wheels on The Smiler became loose and hit riders sat on the front row.

Speaking to the Daily Mail, a spokeswoman for the theme park in Staffordshire said it was shut on Saturday afternoon following a "technical issue".

She said the small, plastic guide wheels "were caught beneath the track in the safety netting, but regrettably several were flicked into the guests sitting in the front row of the train".

"Two of the guests were attended to by Park staff and all four remained on park for the rest of the afternoon."

The BBC reports that an investigation will be carried out to decide if the ride could re-open.

In May, the £18million rollercoaster's launch was delayed due to "teething problems".

Visitors were left stranded mid-air on the 14-loop ride while previewing it and the theme park owners decided to postpone its official opening.

The ride was closed in July after visitors heard a "massive clanging sound" and saw a metal bar on the ground nearby.

The rollercoaster was shut for four days and 48 people had to be rescued.

It closed again in August due to a "technical issue".

Browse our pick of the world's scariest rides...

Boy hit in the face by bird on world's tallest rollercoaster

Womann falls to her death from American rollercoaster