Nothing to declare? Weird stuff seized by customs 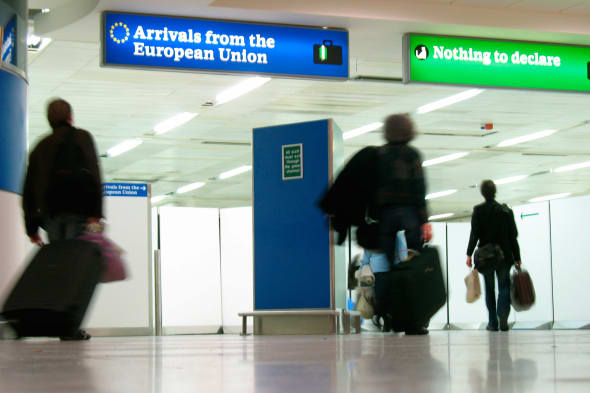 From sex toys filled with cocaine to rare hummingbirds smuggled in Y-fronts, customs officers these days have their work cut out trying to catch smugglers at international airports.

SEE ALSO: Stopped for what? Has airport security gone mad?

Here are just some of the the most bizarre items passengers have been caught carrying through the airport in recent times (there's even a nun's skull and a pair of cocaine-filled breast implants thrown in for good measure)...

Nothing to declare? Weird stuff seized by customs

It's one thing trying to smuggle dead dried insects into the country, but another passenger who was addicted to eating the creepy crawlies tried to board a plane at Switzerland's EuroAirport with live caterpillars. And when customs officers tried to confiscate them, he stuffed as many as he could in his mouth - while some were still wriggling!

In Taiwan, a traveller thought he'd come up with an innovative method of smuggling gold into Korea - by shaping it into clothes hangers. Unfortunately for the gold smuggler the idea wasn't smart enough as customs officers arrested him at Incheon International Airport with £52,000 worth of the metal. That's a lot of hangers...

One man hid a collection of 36 live snails in his luggage. UK Border Force officers at Glasgow Airport discovered the 15cm-long snails which had shells the size of human fists. The Nigerian passenger said the molluscs were going to be used as food.

Some people are prepared to go to extreme lengths to commit a crime. A Chilean man travelling to Barcelona was found wearing a cast made from cocaine on his broken leg. Before he could claim the doctor had got the plaster mix wrong, airport security officers found bags of cocaine in his luggage too. It turned out he did have a broken leg but officials were almost certain he'd broken it on purpose to smuggle the drugs.

Customs officers at Melbourne International Airport discovered 51 live tropical fish concealed beneath the skirt of a female passenger. They selected a 43-year-old woman for a baggage examination after she arrived on a flight from Singapore and became suspicious during the search when they heard 'flipping' noises coming from her waist. An examination revealed 15 plastic water-filled bags holding fish in a purpose-built apron.

A Cypriot monk and two accomplices were caught trying to board a plane in Athens with the skull and bones of a nun in their luggage. When questioned about the remains in his luggage, the 42-year-old monk said he was transferring them from Greece to a monastery in Cyprus because the nun was a saint. But the Cypriot Orthodox church did not believe the story and said the attempted smuggling was sacrilegious.

And just when you thought this gallery couldn't get any weirder, a man was arrested in Miami when he tried to board a flight to Brazil with exotic snakes and tortoises stuffed in his trousers. The passenger put seven snakes and three tortoises inside women's tights but was stopped as he passed through a body scanner at security. It's not the first time custom officials have seized live snakes either... One man tried to board a flight in Argentina with 200 reptiles moving in his suitcase and two men in Kuwait were arrested for trying to smuggle 40 pythons in their luggage.

A New York City man's attempt to smuggle a date rape drug into the US was sniffed out by customs dogs. The 50-year-old put the liquid in bottles and said it was "holy water" but lab tests confirmed the dozens of bottles contained Ketamine, a hallucinogenic used as a date rape drug.

A Dutch man was caught trying to smuggle more than a dozen tiny hummingbirds inside his pants! The birds were hidden in special pouches sewn inside his pants and were individually wrapped in cloth and taped up to stop them from escaping. Airport officials caught the man when they noticed him fidgeting and acting suspicious.

An African prince tried to smuggle cocaine concealed inside onions into the UK. The 55-year-old prince thought the onion odour would hide the drugs worth £163,000. Shrimps and other smelly fish were packed in his luggage but sniffer dogs at Heathrow still managed to smell through the pungent odours.

Yuk! A smuggler was caught trying to hide a live Loris monkey in his underwear at India's Indira Gandhi International Airport. The little monkey measured seven inches in length and weighed 150g. Customs officers found it in his underwear while frisking him. Loris monkeys are an endangered species indigenous to South East Asia and India, and are believed to possess aphrodisiac qualities.

A woman and her daughter were arrested at Liverpool's John Lennon Airport in 2010 when they tried to check in the woman's dead husband on a flight to Berlin. They said the 91-year-old deceased man in the wheelchair was asleep but security was alerted when a member of staff became suspicious.

A woman in Barcelona was caught allegedly smuggling cocaine inside her breasts. Border police noticed the suspicious activity when the Panamanian woman arrived on a flight from Colombia with scars and blood-stained gauze wrapped around her chest. She was taken to a hospital and doctors found cocaine packed inside the implants.

A 48-year-old man tried to smuggle 14 rare Peregrine falcon eggs out of Birmingham Airport. Jeffrey Paul Lendrum wrapped the eggs in socks and attached them to his body to keep warm so that he could hatch them later. The eggs were worth £70,000 and were to be sold by the businessman in Dubai, where breeders will pay thousands of pounds for eggs snatched from the wild.

A spider is the last thing we'd want in our suitcase but one couple from Germany tried to smuggle over 200 live tarantulas through Amsterdam's Schiphol Airport. Customs officials who confiscated the collection said the pair had other insects including "bugs, crickets, grasshoppers and millipedes". The pair had been on a trip to Peru and put the animals in plastic containers and tubes before hiding them in their clothes and shoes.

A 21-year-old woman declared a few soiled nappies at a US-Mexico border crossing but the suspiciously chunky diapers were seized when they were found to contain several links of spicy pork sausage. Customs officials said the nappies were folded to look soiled. Strange!

A man in Bangkok was caught carrying suitcases full of baby leopards, panthers, monkeys and a bear. The traveller thought he could smuggle the 'zoo' of animals through Suvarnabhumi International Airport for a flight to Dubai but undercover police had been watching him ever since he made the black market purchase of animals.

A Mr Potato head toy containing 293grams of ecstasy  from Ireland was seized by Australian Customs back in 2007.
Up Next